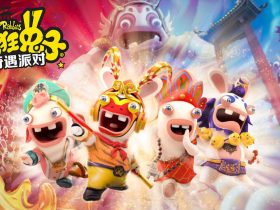 Hasbro, Lionsgate, and nWay have released a new Power Rangers: Battle for the Grid trailer in which Zordon delivers a warning about Lord Drakkon.

For those, like us, that need a refresher, Lord Drakkon is Tommy Oliver from a world where he never strayed from the path of evil – even after Rita’s spell was broken. His ambition unsated by conquering his own world, he turns his gaze towards the entirety of the Morphin Grid.

In Power Rangers: Battle for the Grid, Lord Drakkon is a high mobility fighter with a wide range of attack options that keeps his opponent’s guessing. Although many of his combos and attack sequences are beginner-friendly, there are several advanced techniques players can learn in order to optimize his attack sequences and combos.

The game will see classic Rangers and villains will take each other on in team battles. With a streamlined combat system, it promises to be welcoming for newcomers to the genre while having the depth to appeal to more experienced competitors – with new content and game modes releasing throughout the year.

Power Rangers: Battle for the Grid will release on the Nintendo eShop for Nintendo Switch worldwide in April.