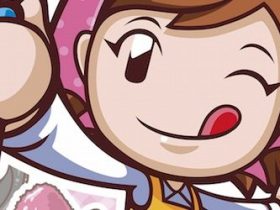 PLAYISM and Atelier Mimina have revealed that Giraffe and Annika is in development for Nintendo Switch.

It stars Annika, a bright-eyed girl with cat ears, who works with Giraffe, a cat-boy with an old soul, to recover her memories.

With “a manga-style comic narrative,” you must recover three shimmering star fragments to unlock new powers that let you reach previously inaccessible areas to collect additional outfits and “cat-tastic meow-sterpieces” of art to view at the local museum.

“Giraffe and Annika has been a passion project with rhythm sections inspired by Elite Beat Agents, which was in turn influenced by my team’s work on Osu! Tatakae! Ouendan!” explains Atelier Mimina developer Atsushi Saito.

“Creating the adventures players will have with Annika has really been an adventure in itself. I hope players enjoy how her journey with Giraffe unfolds, punctuated by the rhythm boss fights, which were so much fun to make.”

Giraffe and Annika will release on the Nintendo eShop for Nintendo Switch worldwide in 2020.