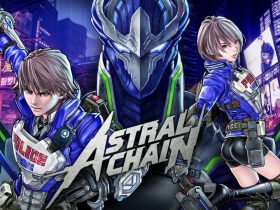 Nacon and Teyon have released a new gameplay trailer for Monster Truck Championship on Nintendo Switch.

This is pitched as “the first simulation to showcase the incredible power of Monster Trucks,” where, climbing aboard a giant truck, you will have the chance to participate in multiple competitions.

With 25 circuits in different cities across the United States and 16 customisable trucks, you can either hop into the game’s Career Mode or compete against up to eight players online in “monster-sized races.”

The developer has chosen to take “a realistic approach to driving rather than an arcade-game style,” meaning that players will have the chance to perform believable aerial and ground moves.

There are five challenge types that you will need to overcome: Race, where you try to finish in first place after completing a certain number of laps against eight other drivers; Time Trial, in which you try to set new time records; Drag Races, where you compete against one other driver on a small section of the track; Freestyle, in which you try to perform as many spectacular tricks as possible; and Destruction, which rewards you for destroying every obstacle you can.

Monster Truck Championship will release at retail and on the Nintendo eShop for Nintendo Switch worldwide in 2020.