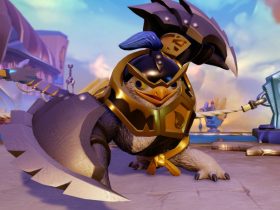 Unleash Your Creativity In Skylanders Imaginators

During a Financial Briefing with investors, acclaimed video game designer Shigeru Miyamoto has revealed that he plans to make a duo of Mario games for Nintendo’s latest 3DS handheld, including both a 2D and 3D adventure.

In doing so, he hopes that through offering two differing titles the company will be able to appeal to all fans of the series.

“When Super Mario became Mario 64, the range of players narrowed greatly,” Miyamoto confessed. “When asked ‘what will we do on 3DS,’ the answer is, of course, we’ll make both. They both have their own appeal.”

Miyamoto believes that the 3DS capabilities will “give a great feeling of existence to Mario, Link and others,” before discussing how they may be integrated.

Although we already see Wigglers and Bullet Bills fly at the screen from a distance in current 2D iterations, such a factor will be enhanced for the handheld.

“It’s difficult to tell when they will hit the player, so we were only able to use these lightly,” Miyamoto explained. “However, we’ll be able to use this type of thing quite a bit on the 3DS.”