It has come to this, the most recent 2D Metroid game. Launched in 2004 on the Game Boy Advance, Metroid: Zero Mission is, in essence, a remake of the classic and original Metroid from the Nintendo Entertainment System. However, while a remake, Nintendo still take the opportunity to intersperse new additions to the game.

Samus Aran has returned to Planet Zebes, a place that she once called her home, to hunt for Metroids – stolen by Space Pirates who now have a base of operations on the planet. Once you’ve landed, you take control of the female bounty hunter as she explores the planet’s regions: Brinstar, Norfair, Ridley, Kraid, Crateria, Tourian and Chozodia, as you hunt for upgrades and look to defeat the Metroids that inhabit them.

Zero Mission has a few additions, which will remain unspoilt here for those who haven’t yet had a chance to play it. While the NES classic ended at one point, the narrative is carried further by taking players to a new region densely patrolled by space pirates and which hides a new final boss. This also notably marks the first time that you play as Zero Suit Samus in a Metroid game. This adds to the longevity of the game and provides some cool differentiated experiences as the gameplay shifts from exploration to stealth. 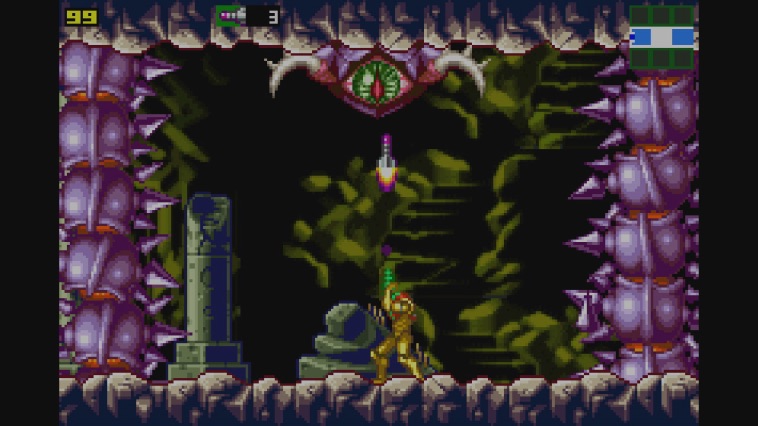 The game isn’t that long, however. You’ll be able to beat it, even unaided from guides, in just a few short hours with a decent amount of upgrades found. The save stations are quite common so you won’t find yourself rushing back to one, but there is a large amount of backtracking in the game that can be frustrating.

As with Metroid Fusion, there are numerous ending images that you get access to for completing the game in a certain amount of time, and with certain levels of completion. That’s not to say that Zero Mission isn’t good; the gameplay is tight and focused and it’s fun to explore, but it just leaves you wanting more. That said, there are perks that unlock when you finish the game such as a Hard Mode, a Gallery and most notably, the entire NES original.

That’s right, this game is essentially two games in one, and you can play the NES Metroid here in all its glory. In fact, it even looks better than the NES Virtual Console title due to the lack of the NES filter that exists, but you do have a smaller field of view, which is regrettable.

Zero Mission’s controls are expectedly very tight, with jumping, shooting and exploring all intuitive, while defeating enemies and finding upgrades will see you soon become equipped with combinations of upgrades and items. Though it does get to a point sometimes where the Screw Attack in your jump may activate and destroy a platform or enemy you’re trying to land on, which can be frustrating.

The graphics are superb, with the 2D sprite work remains top quality and crisp. As with Metroid Fusion, Zero Mission actually benefits somewhat from the screen smoothing feature of the GBA Virtual Console titles, which makes it look really slick, but even without it, the game looks great on either the Wii U GamePad or TV screen.

Zero Mission’s soundscape is wonderfully constructed, with the music often very muted in the background to help give a sense of atmosphere and danger in the areas. Other than that, the sound effects are pretty simple but classic.

Metroid: Zero Mission is well worth playing, either for veterans or newcomers to the series. In fact, it’s a great place for newcomers to start due to the improved save system in comparison to the original. Zero Mission’s one of the titles that can truly be considered a classic from the Game Boy Advance era, even if it drew on past glories as being a remake.