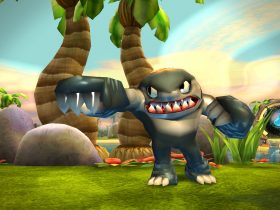 Our adventure starts in a darkened room in Peach’s Castle, where Toad and a suitably timid Luigi are investigating a draught that is letting in cold air. When a mouse scares him, Luigi takes a tumble with the resulting dust causing him to sneeze – dislodging a mysterious book from a nearby shelf in the process. A magical glow emanates from the tome’s pages, soon seeing the two-dimensional characters from the Paper Mario universe spill out and calmly float across the Mushroom Kingdom.

After some initial confusion about their disproportionate counterparts, it isn’t long before Bowser and Paper Bowser work out that they can wreak even more havoc by working together – uniting their goons and kidnapping the two Princesses. That leaves Mario, Luigi and Paper Mario to team up in order to stop them, aiming to return Paper Bowser’s army back to their own world. 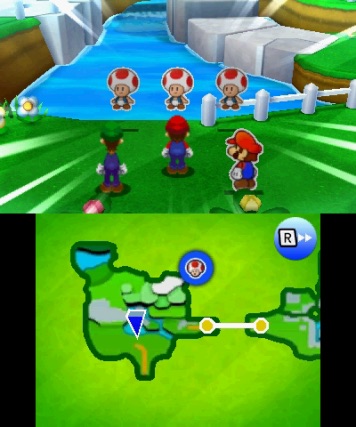 For those that have played either series, the worlds of Mario & Luigi and Paper Mario colliding have somewhat expected results. This is a Mario & Luigi outing by design, with AlphaDream playing to their strengths while reaping the benefit of having another universe to play with. It is in the localisation that Mario & Luigi: Paper Jam Bros. excels, the accompanying script becoming increasingly witty in its mischievousness as the superstar trio’s adventure progresses.

As soon as the opening hours pass, which covers most of the footage seen in Nintendo’s energetic trailers, you can soon take delight in waiting to see what puns await. That mirth is largely produced by seeing the Mushroom Kingdom cast interact with their Paper Mario twins, but it all continues to breathe life into the moustachioed heroes world.

The adventure remains just as much fun as it has always been but now sprinkled with a few new tricks. Mario, Luigi and Paper Mario are controlled with A, B and Y Buttons, jumping and slamming hammers to overcome obstacles and baddies that they face. Paper Mario’s paper-thin physique lets him slip through narrow gaps, but it is the new Trio Actions that will ease traversal of your Mushroom Kingdom surroundings. 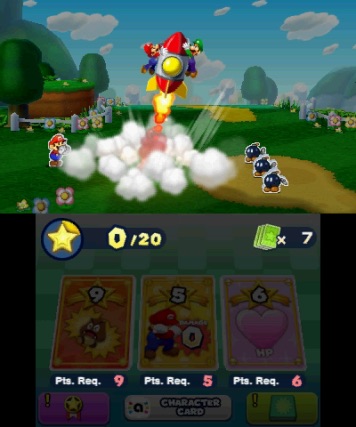 Team Jump and Dash sees each character jump or race in any direction by pushing or holding the X Button, while Trio Hammer sees the trio combine their hammer-slamming efforts to destroy large rocks. These Trio Actions continue to unlock as you journey onward, with the Trio Grab letting you pull yourself over wide distances or grab items to throw them. Whereas the Trio Drill allows you to dig underground, uncovering buried objects and climbing specific walls.

Away from exploration and reading reams of story dialogue, your time will be spent in battle. This continues to use Command Blocks, with players deploying Jump, Hammer and Bros. Attacks to defeat whichever baddies they face. Nabbit makes an appearance early on in the game, and ‘nabs’ your Bros. Attacks meaning that these are steadily unlocked as you recover them from the pesky thief.

The Bros. Attacks remain as action-packed and characterful as they have always been, Mario and Luigi having different choices to choose from – Bomb Derby being a particular favourite! It is Paper Mario’s appearance that opens up a new approach, with a Copy Ability allowing him to make copies of himself – strengthening his solo attacks. That extra oomph can help turn the tide of battle, and each copy acts as a shield of sorts for any enemy damage dealt. 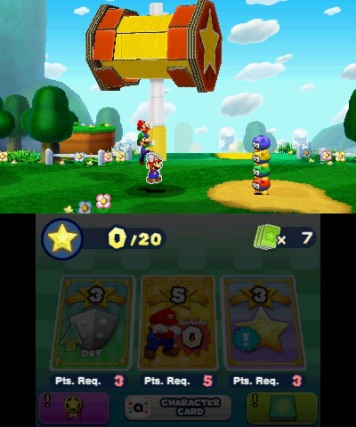 Speaking of enemy damage, players still have a chance to dodge incoming attacks by leaping out of the way or retaliating with a well-timed whack of your endangered party member’s hammer. This element has worked well throughout the series and continues to keep you engaged for the battle’s entirety.

Paper Mario can also activate new Trio Attacks, summoning an oversized paper craft hammer that temporarily turns your enemies into paper. Your character’s then work together to deal damage, Trio Racquet rallying a ball back at a wall while Trio Kite sees you stick an enemy on a kite. Your team must then run to get the kite as high in the sky as they can before Paper Mario climbs the string to smash the enemy all the way back to the ground in a crumpled heap. The animations for these are absolutely brilliantly executed, whether you choose to switch the handheld’s stereoscopic 3D on or off.

Another notable addition is Battle Cards, which can boost attack, defense or deal immediate damage to baddies. Star Points must first be earned before using them, totted up by performing successful attacks on enemies. You work your way through an assembled deck, with three to choose from at any given time of which you can flip any over to discard them. It works well and continues to help refresh the battle scenario. 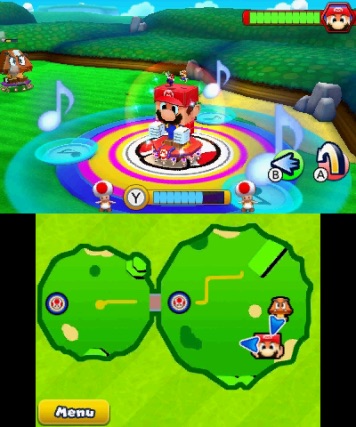 That card trend continues with amiibo, which namely supports Mario, Luigi, Peach, Toad, Yoshi and Bowser amiibo. Once scanned, players can create Character Cards that are similarly used in battle to deal damage or recover HP. You must collect special ‘?’ Cards in order to create them, and if you scan multiple amiibo of the same character you have a chance to create a Sparkle Card. These are all more potent than Battle Cards, and, while they don’t require Star Points, only one can be used per amiibo in battle instances.

Away from exploration and battle, Mario & Luigi: Paper Jam Bros. still has content to throw at you. Lakitu Info Centres are scattered across each of the game’s areas, wandering inside allowing you to accept special Paper Toad Rescue quests. As the name suggests, these see you searching for Toads that have either hidden themselves or been captured by Bowser’s minions. Minigames, in essence, they have a more important role to play in the narrative by helping Toadette construct increasingly complex papercraft.

These are then used in Paper Craft Battles, crazy scenarios where Mario, Luigi and Paper Mario command Toads to carry their enormous papery creation across battlefields. You will be up against Goombas, Kamek and other dastardly baddies, encouraging the Toads at rhythm-based power-up points before dashing off to face them. Such battles don’t provide the finer moments in Mario & Luigi: Paper Jam Bros., but were an enjoyable diversion. 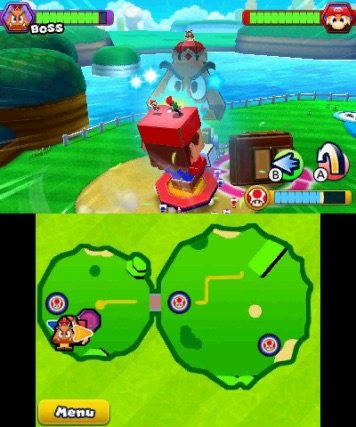 Newcomers to the genre can be helped by activating Easy Mode at any point, making the superstar trio stronger while weakening enemies. This also means that Assist Mode will always be turned on, that shows whichever character an enemy is about to attack – the hope being that it will help you dodge in time.

Regardless of difficulty, defeat in battle won’t cost you countless hours of progress. Players can choose to retry the battle from the start or in Easy Mode, but players are required to manually save throughout the adventure. Why it doesn’t do so automatically whenever you hit a recovery block is a mystery…

Whenever you have some downtime, the Lakitu Arcade will let you once again face bosses that you have beaten, or aim for high scores in remixed versions of Bros. and Trio Attacks. Presenting fun away from the main story, these can reward you with unique prizes.

With unwavering charm, this resoundingly action-packed quest for the superstar trio succeeds on all fronts. There’s little to criticise, presenting an epic collision that results in a Mushroom Kingdom mash-up of near perfection.