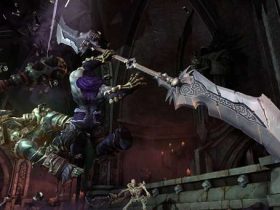 Japanese arcades will roar with the sound of engines again, as Nintendo and Namco Bandai have partnered to develop Mario Kart: Arcade GP DX.

Set to make its debut at the Japan Amusement Expo in a few weeks time, it will arrive at arcades later this year.

Early screenshots reveal the inclusion of recent additions to series, such as glider mechanics, which were first seen in Mario Kart 7. Cameras will also track player’s faces, in similar ways to the original Mario Kart Arcade GP.

Within the recent Wii U Direct, Nintendo confirmed that Mario Kart Wii U will be shown in playable form at E3 2013 in June.