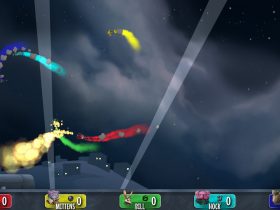 Fight For The Skies In Baron: Fur Is Gonna Fly On Nintendo Switch

Koei Tecmo has revealed more about the new battle features in the upcoming role-playing game, Atelier Lulua: The Scion of Arland.

It has a turn-based battle system where players can form a party consisting of five characters, which, broken down, will have three attackers and another two in a supportive role.

The support characters will automatically perform Assist Attacks to match the attacker’s actions, that, if triggered regularly, will maximize the damage that is dealt to enemies.

And then, Attackers have unique skills that can be used to strike enemy weaknesses. Eva, for example, can use the Range Shift skill to expand her area of attack for a few rounds.

These abilities can also help to decrypt the Alchemy Riddle, unlocking new synthesis recipes and skills. Depending on the formation of attackers when an encounter starts, a special dormant ability called a Primal Art can also be awakened. These automatically activate and offer the party support in the battle ahead, whether that be increasing Item Damage or Attack Damage for the entirety of the fight.

Lastly, there’s the new Interrupt ability that, once a gauge becomes full after performing attacks, can see you trigger this skill to use a pre-equipped item – the benefit being that it won’t be consumed in the process.

Atelier Lulua: The Scion of Arland will release for Nintendo Switch in North America on May 21st, and across Europe on May 24th.