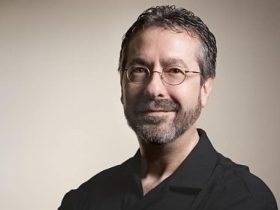 Warren Spector appears on his own unique virtual trading card

The Wii U’s controller offers a lot of potential for functionality beyond purely gaming, and could even be “the TV remote of the future” according to comments from Nintendo’s Global president Satoru Iwata.

“For example, there’s video chat or they may want to do web browsing while watching the screen on the big TV and managing operations with the screen in your hands,” Iwata explained. “For the past decade or so, many attempts have been made to link the TV and the internet, but so far, nothing has been popular… [But] when you look at this controller, it’s one foot away from your eyes – it has almost the same distance of the PC and other smartphones. In other words, this device is capable of handling such activities for you to input the letters in the palm of your hands.”

He continued, “In the future, if the TV and Internet can be used together, the TV will have a remote with a screen – and it will look very similar to how the Wii U controller is today,” he added. “While on one hand we are trying to reach out to the hardcore gamers, we are also trying to make something that can be used as the TV remote of the future.”

Iwata then discussed how the controller would be utilised for first-person shooters that are aimed towards core gamers.

“When we approached the third-party publishers to tell them about the Wii U, all the publishers volunteered to make advancements in the field of shooting games that they are very good at,” he explained. “For example, ordinarily when you are playing a shooter type of game, your main TV screen is the battlefield; however, oftentimes you have to open a new window to select items or weapons or to see the entire map. But you don’t have to do that anymore with Wii U because you’ll have a screen that will show you that information.”

[Thanks, All Things D via CVG]