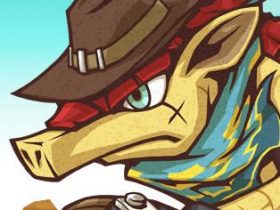 If it was ever in need of one, Hyrule Warriors Legends is the perfect advert for the improved innards of the New Nintendo 3DS. This handheld port of Koei Tecmo’s hack-and-slash adventure is literally bursting with action-packed content, but performance issues threaten to hinder the experience for those that choose to play on a standard Nintendo 3DS.

That is an undeniable shame, as, for those that can lead the charge across Hyrule on Nintendo’s revised model, it readily impresses at every turn in how closely the developer has been able to match the 2013 Wii U exclusive. That’s excusing a necessary graphical downgrade, character models now given a faint outline similar to the method seen in Super Smash Bros. for Nintendo 3DS whereas reduced draw distances result in object pop-in from afar as you rush around the battlefield. That is only a minor issue in comparison to playing on Nintendo 3DS, where such problems are more frequent and frame rate inconsistency plagues the game to the point that you’re left wondering why Nintendo hasn’t chosen to position this as a second New Nintendo 3DS exclusive.

Right, now that’s out the way. Blending the repeated enemy slicing seen in Koei Tecmo’s Dynasty Warriors series with the characters and locations from Nintendo’s The Legend of Zelda, Hyrule Warriors Legends can still stand proudly as a collaboration to be savoured.

It is in Legend Mode where players will initially spend most of their time, which treads an all too familiar tale in which Link, a trainee soldier in the Hylian army, is soon met with destiny when dark forces lay siege to Hyrule Castle. With Princess Zelda making a sudden disappearance, Impa requests your help to find her and pleading that you become a hero worthy of wearing the iconic green tunic.

This campaign is a lengthy one, players tackling multiple scenarios that trace Link’s heroic journey complete with animated cutscenes that lend themselves well in bringin Hyrule and its inhabitants to life. It won’t be new to players that have already tackled the same mode in Hyrule Warriors, but the main attraction to those that have will be Linkle.

Scattered throughout Legend Mode are a handful of scenarios in which the dual crossbow-toting heroine is introduced. Linkle’s own tale revolves around her belief that she is the legendary hero destined to save Hyrule, and, having heard about the invasion, sets off to Hyrule Castle with help from her mysterious compass. Lacking any sense of direction, she repeatedly takes wrong turns, which provides enough of an excuse to see her bump into Skull Kid, Princess Ruto and other characters on the way. Linkle is brilliant, but her clumsy personality came as a disappointment considering how fearless and destructive she is on the battlefield.

The excitement around new characters continues with The Wind Waker HD‘s Tetra, King Daphnes and Toon Link, as well as Skull Kid from Majora’s Mask. As with all characters, particular care has been taken in transitioning these into the Dynasty Warriors fighting style and each takes to battle with their own distinctive flair. The chance to transfer them to Wii U is a welcome one, and I’m sure that players will soon find a favourite from the assorted cast.

It is the scenarios themselves that risk depleting your enthusiasm, tasking players with the same repeated objectives with little variance. Whether that be capturing keeps, escorting characters, taking on giant bosses such as King Dodongo and The Imprisoned, or chasing down marauding forces, there’s far too much similarity between each scenario to keep you away from nearing boredom.

Koei Tecmo has tried to respond to this, seeing as Hyrule Warriors had faced the same criticism. New enemy types come in Assault Troopers, Rally Troops, Keep Saboteurs and Messengers, each necessitating that the player reacts to their appearance or otherwise risk their forces becoming overrun. It makes the battles more lively, a continuous barrage of messages seeing you left to prioritise whichever seems the most troubling. This means that there is more need to dash back and forth across battlefields, which sounds a worrisome change if it weren’t eased in a few ways.

The first is that the player can freely switch between characters on the touch screen, which is an absolute godsend when coupled with the accompanying ‘Command’ option in the pause menu. This lets you direct your computer-controlled companions to specific locations or objectives, leaving you to concentrate your efforts on countering problems in your more immediate area.

Players are also handed an ocarina early on, which lets you warp to activated Owl Statues on the battlefield. These aren’t placed in every scenario for some reason, but give chance to react quickly to any danger with your most potent character.

RPG elements underpin the experience, seen in characters continually levelling, securing increasingly stronger weapons from the enemies you topple, there being weapon elements to consider, and collecting materials that can be used to craft stat-boosting badges. There’s enough to make the experience feel particularly rewarding, and that the time you are choosing to spend with the game is continuing to strengthen your characters.

Beyond this, Adventure Mode will occupy you. Here, your aim is to defeat the Dark Ruler and save Hyrule, taking on challenge scenarios that are spread across a grid inspired by Nintendo Entertainment System’s The Legend of Zelda. Each map square represents an individual challenge area, with players required to score a set Battle Rank to unlock those next to it. Item Cards, such as candles, power gloves and bombs, must be used to search squares, letting you uncover a character, costume or weapon to unlock. If you enable your Network Connection or StreetPass, ‘Network Links’ or ‘StreetPass Links’ will also appear on the world map. If you assist these by winning battles at their location, it lends you another chance to secure yourself even greater rewards. It’s a neat touch.

With four DLC packs on the way, the new season pass will make Hyrule Warriors Legends a game that you will want to return to throughout the year ahead. Drawing inspiration from Link’s Awakening, Phantom Hourglass, Spirit Tracks and A Link Between Worlds, these promise four playable characters as well as new Adventure Mode maps, My Fairy costumes, and weapons. It’s the right approach to broadening the game’s already comprehensive content, and we’re now left to guess which characters will be added.

The only other addition is the My Fairy mode, which, for some reason, I found difficult to unlock in Adventure Mode without pointers from others that have penned reviews. This will see you rescue fairies on the battlefield, each with an affinity for an element that must be taken into consideration – given that they can protect you from taking damage in keeps imbued with magic. That protection is helpful, but it is their Fairy Magic that will prove more beneficial in helping you to topple bosses or larger swarms of foes. Between missions you can feed and dress your fairies, building their trust and strengthening their stats by levelling them up. It isn’t a particularly necessary gameplay component, but pushes an accompanying character to the fore that most still associate “Hey, listen!” with.

Hyrule Warriors Legends is an empowering experience in a world that we have all grown to love. On New Nintendo 3DS, it is a solid port that comes packed with content to see you occupied for weeks on end. But, for those with a Nintendo 3DS, it’s an experience best left until you can upgrade.