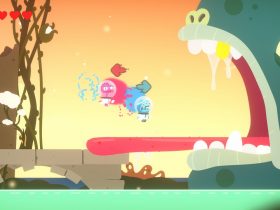 Jog, Jump and Switch To Match Colours In Joggernauts On Nintendo Switch

Nintendo has revealed that you will soon be able to gear up with the Ultra Stamp special weapon and Torpedo sub weapon in Splatoon 2.

You will be able to buy them in Sheldon’s Ammo Knights weapons store when it is restocked next week, once the new software update is pushed live.

“We just uncovered more details about an upcoming new special weapon! The Ultra Stamp lets players attack with an enormous hammer. Pressing and holding the ZR Button allows you to advance while striking with the hammer! It looks like you can guard ink attacks coming from the front, but your back is exposed,” the Squid Research Lab explains.

“If you press the ZR button while you’re in the air, the Ultra Stamp will flip vertically so you can attack opponents mid-air. You can also throw the stamp with the R button to attack a distant opponent! Of course, throwing away your special weapon will end your attack.”

And then for the Torpedo sub weapon, they add: “We’ve just received a fresh report about a new sub weapon called the Torpedo. When thrown near an enemy it changes shape and targets the foe, exploding on impact and splatting ink everywhere. Torpedoes thrown by opponents can be shot down with your attack.”