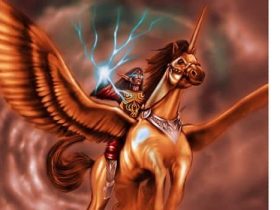 Fox n Forests is the story about a fox (in a forest) who forms an unlikely pact with a cocky partridge in an effort to save a talking tree. No, this isn’t a Kevin Smith stoner take on The Animals of Farthing Wood. It is, in fact, a Kickstarter-funded project from Bonus Level Entertainment, whose love for pixelated nostalgia has led them to make this 16-bit fox-trotting adventure with a season-swapping spin. The question is, with so many indie-developed games out to relive the days of old, can this tree-dwelling action platformer do enough to separate itself from the noise?

Fox n Forests sees you playing as Rick, a fox who has been roped into saving the world by travelling to various lands made up of the four annual seasons. The guardian of the forest – a giant tree that looks very much like the Great Deku Tree – has had his magic bark torn from his trunk and scattered throughout the multi-seasonal lands. To aid the fox in his journey, the tree grants him with a special crossbow and the magical gift of changing the current season into its polar opposite. As you have probably already have gathered, it is these very mechanics that play centre stage in the adventure.

Before we spread some light on this season-changing feature, let’s focus on Rick’s skill set. First off, your methods of attack all depend on your actions. For instance, the bow that you possess can only be shot when stood still, while your little close range sword is restricted to a crouching attack or during your first jump. Rick does have the ability to double jump, although at the beginning of the adventure that extra hop will leave him completely vulnerable. The good news is that you can upgrade your melee attacks and arrow trajectory to make revisiting levels (which you will be doing a lot of) much easier to deal with. 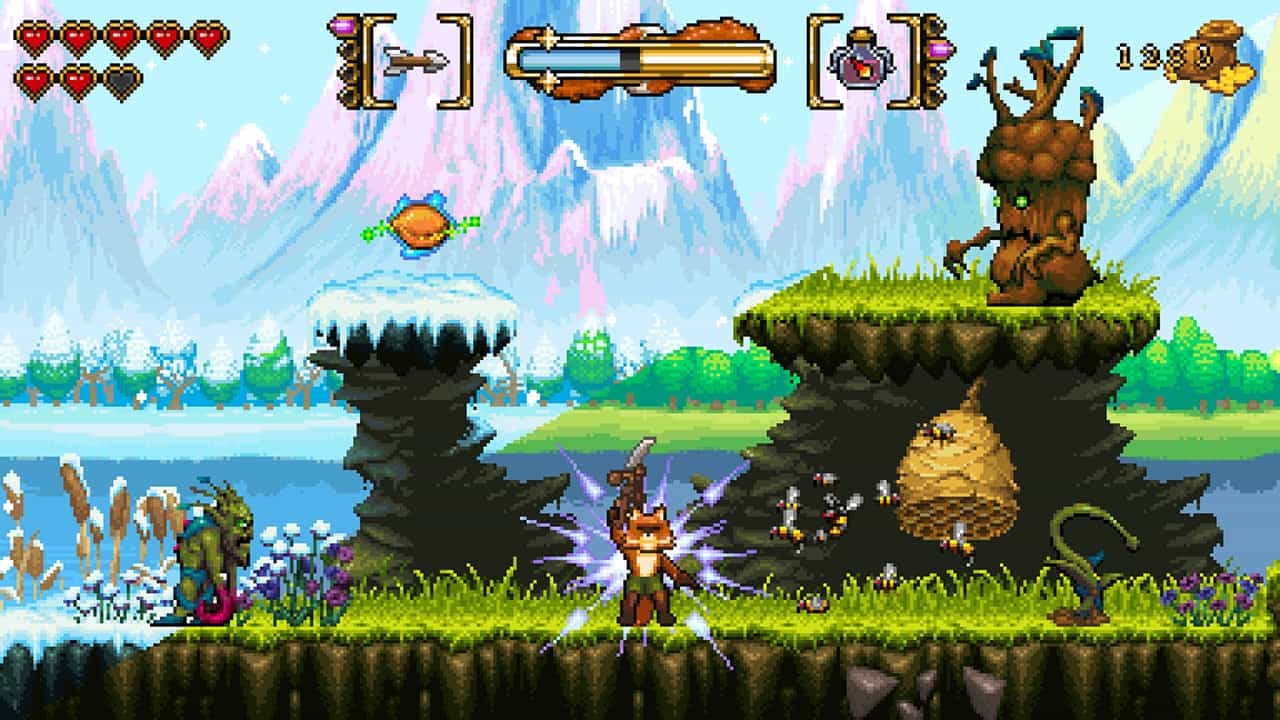 While the combat itself takes a little getting used to, it soon all gels together well enough to at least be practical. The small additional combat improvements that you purchase from the pesky partridge also provide a light RPG element to it all. One particular move you can buy is a second jump spin attack which, in all honesty, should have really been there from the start. It doesn’t take long to actually acquire the perk, but not having it from the get-go initially made me feel like there was something missing while venturing through the first level. Going back into the same level again with said ability at hand instantly made it far more enjoyable to the point that I felt it would have made a better first impression had it already been at my disposal.

The season ability that you wield is going to be the answer to most of your problems. With a tap of the ZL or ZR Button the whole level instantly changes your surrounding to reflect that of an alternative climate. This allows you to reach places that are impossible prior to the change, along with gracing the grounds with a nice extra visual flair. It is, of course, only a temporary advantage for it will quickly drain a meter that allows the effect to take place. The meter will slowly refill of its own accord and can be boosted by collecting gems floating throughout the levels. The season system itself is a cool feature by how it varies up the level design, although it doesn’t really do anything that stood out to me to make it much different to what’s already been done many times before.

That’s not to say it isn’t a fun addition, because it is. There are some nice little touches here and there, like how the baby birds sit in a nest defenselessly in spring only to act as your predator in autumn. Or by how a frozen lake or falling brown leaves can provide a platform to get to otherwise unreachable areas. It’s more the case of how the game constantly relies too heavily on the season switching for environmental puzzles that I found a bit disappointing – whereas the rest of your problems are usually just as easily solved with a certain arrow or attack ability. Besides a couple of side-scrolling shooter sections shoe-horned in, the game struggles to really think outside of the box than I had initially hoped it would. 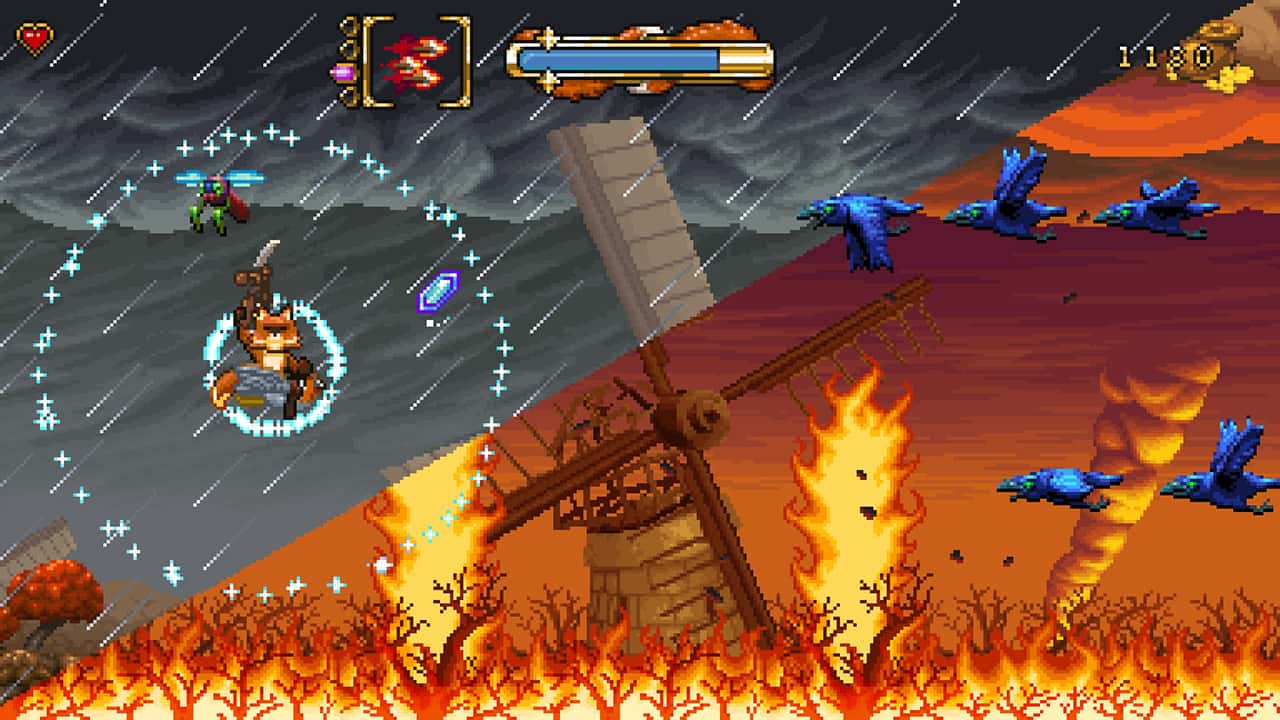 Fox n Forests is very short, containing only two rather lengthy stages per season with a bog-standard boss fight to round them off. To lengthen the experience, every area on the map does have an extra stage to journey through once all the hidden seeds of each season have been found. In fact, you can’t actually move to the next season until the required amount of seeds have been discovered in a previous section. This, in turn, urges you to back-pedal your way through past levels multiple times. Despite some stages holding enough strength to tempt you into revisiting them at least once, having to jump back into the same one several times does become quite tedious. Certain secret areas containing seeds cannot be accessed until you have the required arrow upgrade either, which makes ticking off your shopping list that little bit more frustrating. This is because you only receive a special arrow ability once you have beaten a boss, making the reward of victory seem somewhat counterproductive as you are usually forced to retread your steps once again.

While collectables in platformers are a common staple point to the genre, here it feels more like padding to stretch the gameplay a little further than it really should. There is a hub area to upgrade your vitals, move sets, special potion abilities and what-not, but obtaining these also demands a certain amount of collectable resources and cash. This leaves you with even more re-exploring to do, which, again, can be all well and good if done right, but here it rarely delivers anything to feel new or as interesting as it could have.

It’s a shame really because, on a visual standpoint, it’s a very good looking game with plenty of nice combinations of colours and a decent variety in stage design. The game’s name play on Ghouls ‘n Ghosts gave me the impression that it may hold a similar addictive quality as the 90s SNES classic. In reality, it felt more of a competent but generic experience that’s been done a million times before.

All in all, Fox n Forests is a competent platformer that holds plenty of potential. Unfortunately, the game’s over-reliance on the season gimmick and heavy influence from the past makes it fall short of being anything more than average. It does control well enough and there’s plenty of charm to be found here – it’s just a shame that the game relies too much on backtracking to compensate for the lack of new levels and ideas. If you’re a true platform nerd who likes collecting things, then Fox n Forests may be worth looking into. However, if you are seeking a brand new experience in the genre, then you may be left feeling that there’s a little more to be desired.