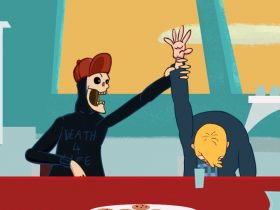 Screenwave Media Games and Pixelnicks have announced that Eagle Island will release on Nintendo Switch next month.

With falconry-inspired gameplay, you will have the chance to discover Eagle Island’s avian world with Quill and his loyal owl companion, Koji.

In this rogue-lite Metroidvania, you will explore lush forests and treacherous caverns to uncover the ruins of long lost civilizations.

Your goal is the confront Armaura, a gargantuan deity, who has captured Ichiro, in a gameplay experience that the developer has described as “a love letter to classic adventure platformers.”

Eagle Island will release on the Nintendo eShop for Nintendo Switch worldwide on July 11th.