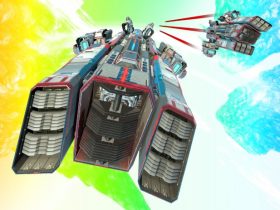 Soar Through Fantastical Forests In Flight Of Light On Wii U

HOF Studios has announced that Depth of Extinction: Definitive Edition will release on Nintendo Switch next week.

You will have the chance to explore a flooded future world in this subaquatic turn-based strategy RPG, in which you must save humanity from killer machines that are plotting its demise.

As the sole defender of humanity’s last government, you must create the ultimate squad from 10 character classes that can be outfitted with 115 different weapons, armour and items.

The Definitive Edition “ups the ante,” introducing new enemies and maps as well as tactical options such as setting up ambushes or using stealth to catch your enemies by surprise.

“I’ve had a long-running love for tactics games for a couple of decades now,” explains HOF Studios founder and lead developer Mike Stumhofer. “My favourite game from back then was Terror from the Deep and I essentially created Depth of Extinction as a spiritual remake of that game with modern gameplay mechanics from games like XCOM and FTL.”

Depth of Extinction: Definitive Edition will release on the Nintendo eShop for Nintendo Switch worldwide on 4th June 2020.