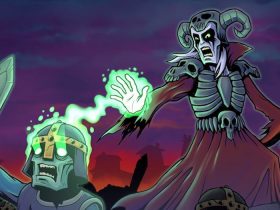 Raise The Dead In Undead Horde On Nintendo Switch

Mankind is destroying the planet and it is up to you to stop them in this “action-packed, adrenaline-filled roguelite shooter.”

This sequel to Spareware will see you build up your force of robots to defend yourself from futuristic police troops who have been ordered to dismantle you.

Challenged to defeat waves of enemies, it’s inevitable that your Rogue Robot will be defeated. This will see you change to the next randomised map, with the chance to customise your machine with parts that unlock different abilities.

There is also a co-op multiplayer mode where up to four players can team up, which can be played both locally and online.

Rogue Robots will release on the Nintendo eShop for Nintendo Switch worldwide on 12th June 2020.