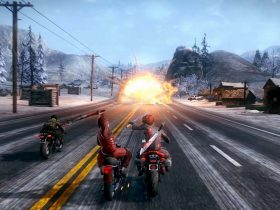 RedDeerGames has revealed that Cyber Protocol will release on Nintendo Switch this week.

After your friendly companion Android G0X6 becomes damaged after a job went badly, you must access his mainframe, activate the protocol responsible for his “life” functions, and repair him.

This hacking-themed arcade puzzler has been set in a Cyberpunk scenario and will challenge you to successfully solve 100 level boards to save your android friend, throwing new traps and different mechanics at you along the way.

There’s the chance to team up with up to four players to compete locally, and a separate Arcade mode that increases the pace and limits the lives that you have.

Cyber Protocol will release exclusively on the Nintendo eShop for Nintendo Switch worldwide on September 26th priced at £8.99 ($9.99), with a discount available until October 12th.