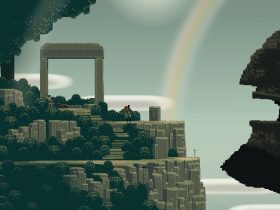 Superbrothers: Sword & Sworcery EP Out On Nintendo Switch This Week

Japanese monthly manga magazine CoroCoro Comic will land at newsagents this week, and, with subscriber copies landing on doorsteps early, has seen the publication exclusively reveal that Mega Evolutions are back in Pokémon: Let’s Go, Pikachu! and Pokémon: Let’s Go, Eevee!

Serebii reports that the gameplay mechanic will continue to work as it did in previous games, in that the player will need to receive the Key Stone and a Pokémon’s Mega Stone before a Mega Evolution can be performed.

The “awe-inspiring transformation certain Pokémon can undergo during battle” was first introduced in Nintendo 3DS exclusives Pokémon X and Pokémon Y. It sees a Pokémon draw on their reserves of strength and power to Mega Evolve, which can see their looks change and stats increase while others may change their Ability or type. Once the battle is over, the Pokémon returns to its usual state.