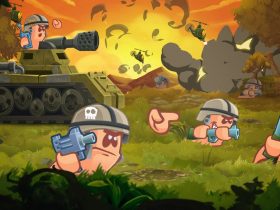 Konami has announced that Contra: Rogue Corps is now available on Nintendo Switch.

Set several years after the Alien Wars, it follows a former military group living on the fringes as bounty hunters and treasure finders in the Damned City.

Survival requires fast reactions, powerful weapons and the occasional organ and cybernetic augmentation – completing missions rewarding you with the chance to gather the resources needed to upgrade your guns.

There are four characters that you can play as in Contra: Rogue Corps, each with their own unique skills and specialty attacks:

Kaiser: A soldier from the Alien Wars rebuilt after receiving massive injuries, now has a massive arm that transforms into a drill.

Ms Harakiri: Famed assassin specializing in stealth and infiltration, after barely escaping death during the Alien Wars, she fused together with an alien, now taking residence in her midsection.

Hungry Beast: Once the noted (human) scientist Kurt Steiner, he had his brain inserted into a giant cyborg panda and now spends most of his time looking for delicious snacks.

Gentleman: Brain Bug alien raised by humans. Feels the rest of the team are ill-mannered and vulgar, especially the Panda. Argues over table manners and the neatest and most efficient way to dispatch an enemy.

There will be a limited day one edition that comes with two retro Contra-inspired in-game t-shirts as exclusive character skins for Hungry Beast to wear.

Contra: Rogue Corps is now available at retail and on the Nintendo eShop for Nintendo Switch worldwide.