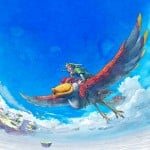 ONM award The Legend of Zelda: Skyward Sword a 98% score

Club Nintendo members who register two Nintendo 3DS games between November 1st and January 31st 2012 from a selected list will be able to receive a 3D Classics: Kid Icarus as a free download, Nintendo of Europe have announced.

You’ll receive a code to downloaded the remastered 3D version of the Nintendo Entertainment System (NES) classic, for free, when it becomes available exclusively for promotion registrants from January 5th 2012.

You can check here for more details, http://registrationreward.nintendo.co.uk/