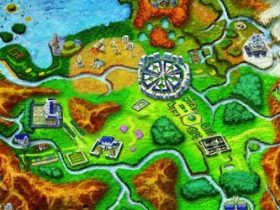 During the Championships, taking place across Europe during March and April, Pokémon fans will be able to collect a rare Shiny Larvitar, a Rock and Ground type Pokémon with unusual colouring.

This Shiny Larvitar knows the powerful Fighting-type move Superpower, previously only available in Pokémon HeartGold or SoulSilver from a special tutor. It also comes holding a useful Chople Berry, which is difficult to obtain in the games.

Larvitar can eventually evolve into Tyranitar, which, thanks to its strong stats and its Sandstorm ability, has proven to be a popular character with players since first introduced in Pokémon Gold and Silver.

The 2012 Pokémon Video Game National Championships are due to be held on Saturday 3rd March, at the Birmingham NEC within the UK.

You can also catch a teaser trailer for the event below: