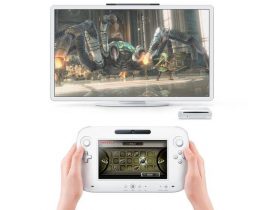 First images of Wii U and its controller

“The Wii U certainly looks like it will enable creators to come up with all kinds of never-before-seen gameplay ideas,” Resident Evil Revelations director Koshi Nakanishi explained to Official Nintendo Magazine. “There are lots of things I’d like to try out on it.”

Rather than simply porting Resident Evil 6, however, Nakanishi would want to craft an experience entirely suited to the console.

“If I was to work on a game for the Wii U, I would definitely want to make something that couldn’t be done on any other hardware.

“The [Wii U] GamePad’s separate screen enables so many possibilities, and playing on a television screen would enable sharing the experience in a way that wasn’t possible on Nintendo 3DS.

“I feel it would let us create a very unique and fun Resident Evil game.”