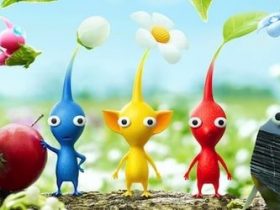 With one-hit kills, you will battle it out as lethal food-based creatures – such as a Milk Carton or Avocado – in an attempt to tear each other apart in fast-paced food fights.

Simple to learn, up to six players can join the brawl in local multiplayer with advanced techniques seeing you deflect attacks, curve throws and draw the boomerang back across the map when playing defensively.

There are also 12 stackable power-ups that can coat your boomerang with flames, frost or explosives, helping you to beat your competition in the game’s more than 30 deadly arenas that take their inspiration from Hong Kong action movies.

The game has multiple modes such as Free-For-All, Team Up and an asymmetrical mode that will challenge you to fight for possession of the Golden Boomerang.

Boomerang Fu will release on the Nintendo eShop for Nintendo Switch worldwide on 13th August 2020 priced at $14.99.