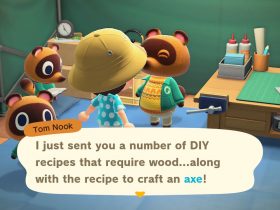 Animal Crossing: New Horizons Tools: How To Get A Shovel, Axe, Pole, Net And More

There’s a great game hidden somewhere inside of Asterix and Obelix XXL 2 but it’s often buried under tedious repetition and lackluster environments. Let’s get this out of the way; I love the Asterix franchise. I have done since I was a kid and I’ve even been to France to visit the theme park based on the well-loved comics. There will always be a part of me who wants to love this game because it features some of my favorite characters as well as the humor the comics thrived on. However, there’s little you can do with the concept beyond running around looking for items and fighting. Which is basically what Asterix and Obelix XXL 2 does constantly.

Using a very common plot within games and comics, it seems Getafix, the Druid friend of our twosome has been kidnapped by the Romans. This means that it’s up to Asterix and Obelix (with a little help from Dogmatix) to save him by traveling through various environs and bashing the heads of any Romans who cross their path. 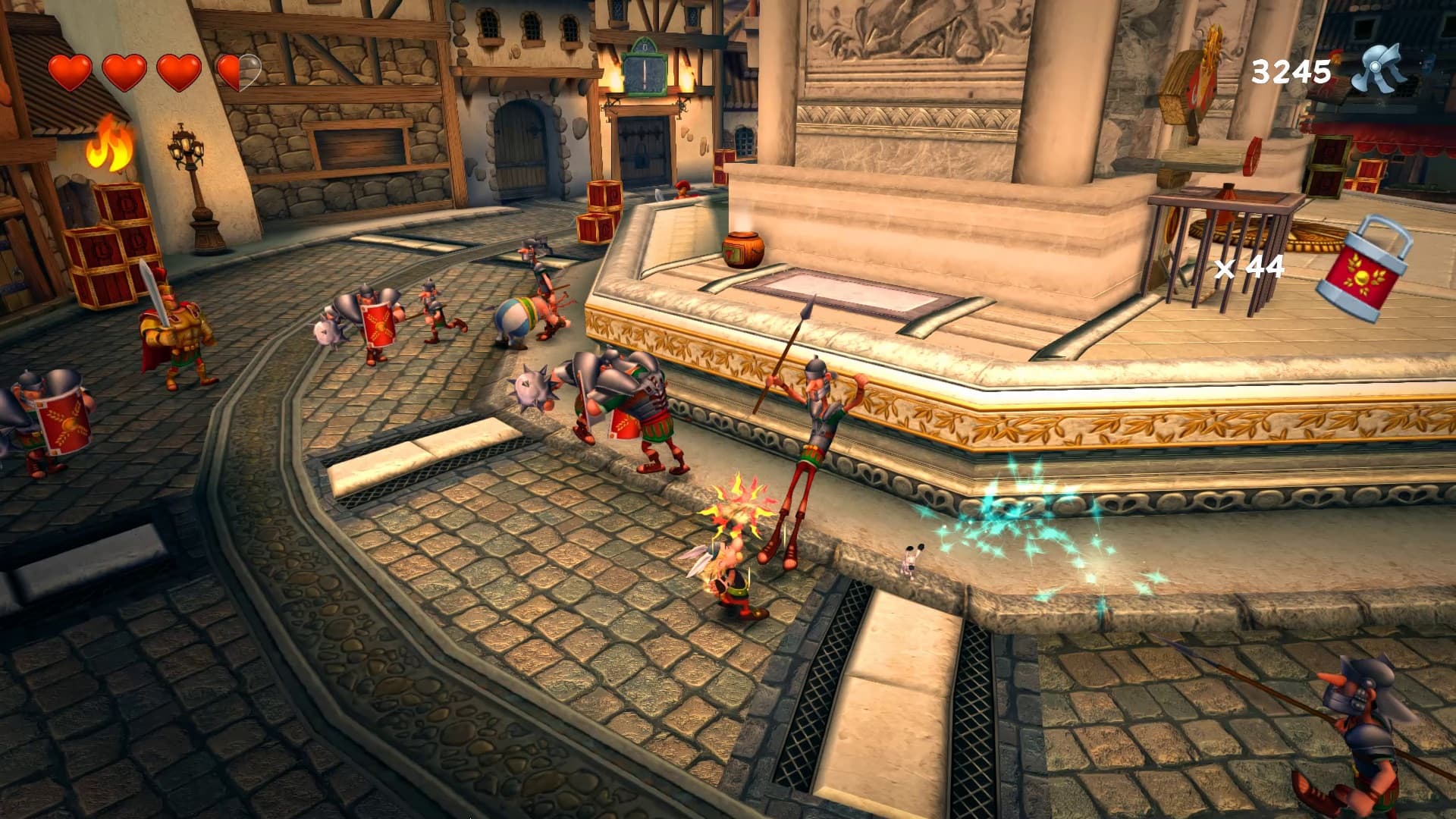 If you look beneath the obvious wonderful design of the heroes, which has been established for years, there’s a very generic adventure game that relies a little too much on tropes and stereotypes of the genre. In fact, you could reskin this game with a variety of other franchises and the game wouldn’t really change. You choose from Asterix or Obelix, switching them out on the fly to open new areas using specialized abilities and constantly move forward, pausing to fight. Rinse and repeat.

I suppose the reward for sticking it out through the fights are the cutscenes featuring the tongue-in-cheek jokes we’re accustomed to. And, to be fair, the fighting can be fun at times. Asterix and Obelix XXL 2 is, at its heart, a Double Dragon style brawler meshed with 3D sensibilities. While the combos can be a bit of fun and the sound accents each thump and thwack, it all falls a bit flat for two reasons.

Firstly, the actual fighting often goes on for a bit too long. Many of the big brawls see you trapped within a gated area having to defeat a set number of Romans before you can move on. This is uninspired at best – many of these areas begin to drag and even the addition of on-screen button commands to pull of eccentric combos doesn’t quite break the monotony. Secondly, if the game is to heavily feature so much fighting, it’s a wonder why the developers didn’t use a crisp 2D style in a side-scrolling fashion. 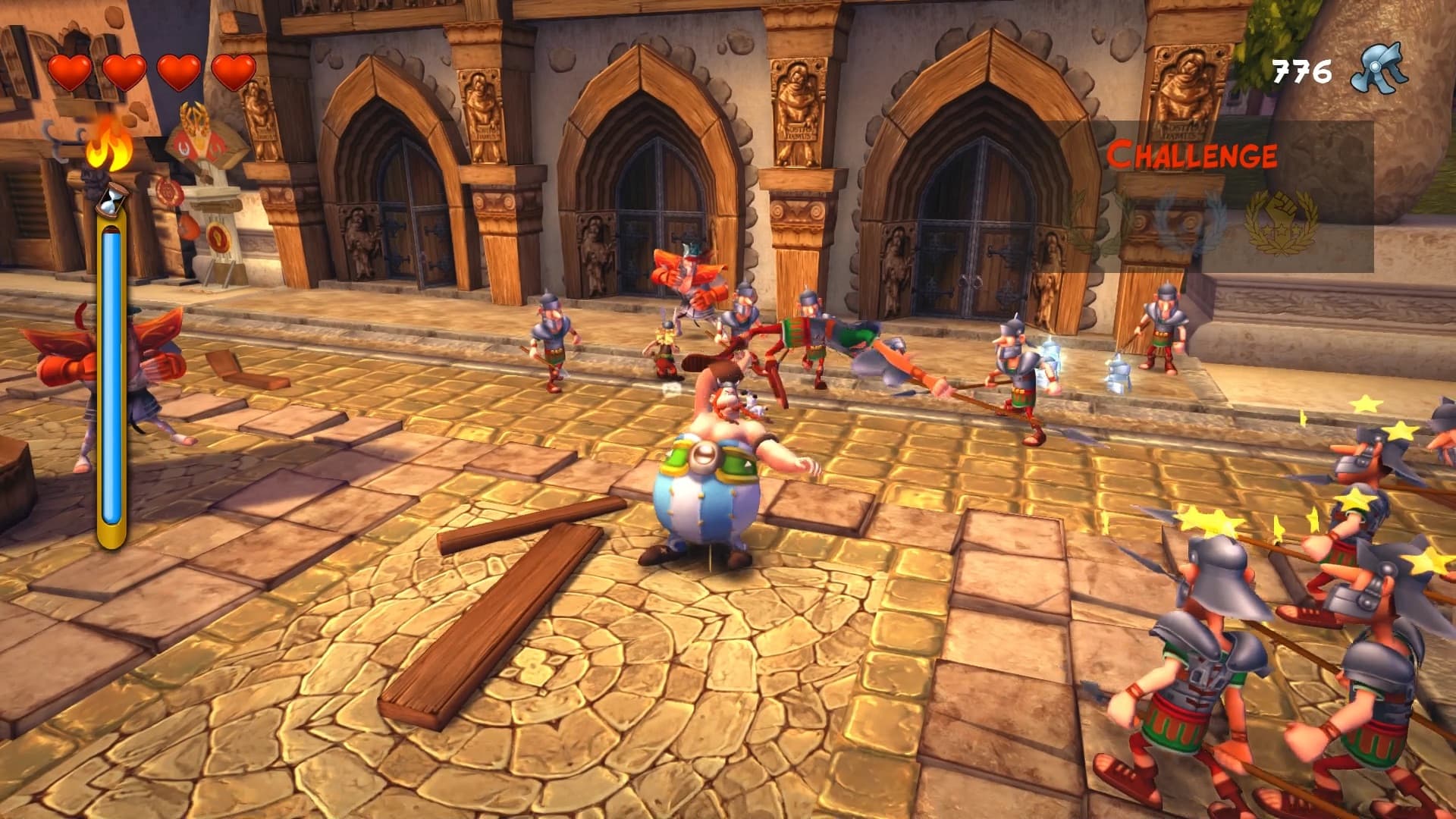 There are far too many instances of being swarmed by enemies which results in either button bashing or broken combos because Asterix and Obelix simply can’t focus on moments. It’s all too easy to end up double-jumping into the air and smashing down to the ground to clear a path. The Romans often feel like dumb drones who hone in on you swinging swords and punches with wild abandon. There’s no sense of constructed challenge, just swarms and swarms of repetition.

Sure, the level design away from the fights can be interesting, using the two characters to explore and unlock areas. Obelix can pull Asterix along zip-lines and Asterix is a nimbler character to squeeze into new rooms, but this has all been used in other games to the point of exhaustion. As a mindless fighter for kids, Asterix and Obelix XXL 2 does a great job, but those looking for more depth or a good use of the license will feel disappointment. Aside from familiar nods to the comics through the background design of Las Vegum and the odd cutscene, there’s not much here for fans or even newcomers.