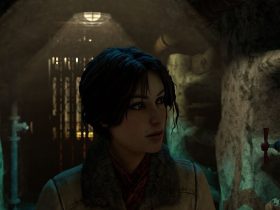 Syberia 3 Out On Nintendo Switch In October

Besides Assassin’s Creed Unity, Assassin’s Creed III is easily the most divisive game in the series. Aiming to be the next evolution in the franchise, this chance to relive the American Revolution launched to some very mixed reception and was generally seen as the black sheep of the franchise up to that point. There are some people who love it but there are also those who really hate it, and so it’s easily one of the most interesting Assassin’s Creed games to look back on.

From my own experience, Assassin’s Creed III was always one of the more middling titles for me. The characters and world failed to grip me as much as I had hoped and it generally felt quite boring more than anything else. The tree-running and rope darts were awesome, though.

With some time and a port to a completely different console, is Assassin’s Creed III the same mixed bag as it once was, or has it aged like fine wine?

Unfortunately, Assassin’s Creed III Remastered on Nintendo Switch does the game no favours and actively makes it the least enjoyable way of playing, even with the novelty of playing it in handheld mode.

Before talking about the quality of Assassin’s Creed III Remastered, it’s important that we discuss how the Switch port performs. It was always a bit suspect whether the portable home console could handle an open-world like that in Assassin’s Creed III and it turns out it really can’t unless it’s in handheld mode. Handheld mode mostly stabilises the framerate and minimises the obvious graphical downgrade to the point of actually being an okay way of playing the game.

As soon as you put it into docked mode though, prepare for trouble. The framerate takes a noticeable nosedive and it suddenly becomes very clear that this is the least powerful version of the game out there. Character models look poor and the level of detail throughout the game is just not up to standard.

It’s not just the graphics that make this a poor way of playing though. Assassin’s Creed III is already a pretty dated game, but the move to Switch has only served to highlight that. Environments look flat, character models look a bit uncanny valley and the animations can be pretty stilted. This isn’t the worst remaster effort out there, but it certainly doesn’t make it easy to recommend Assassin’s Creed III Remastered for the Switch.

Even if Assassin’s Creed III Remastered was the perfect port and had minimal faults from that process, it would still be difficult for me to recommend it. Assassin’s Creed III still remains to be one of the most uninteresting titles in a series that only seems to be getting more exciting. Ambition is a fantastic thing to have, but that doesn’t mean it always lands.

The first issue comes from the story and characters. Although the Haytham twist is still pretty cool, Assassin’s Creed III feels a lot like Connor just listens to characters complain before begrudgingly following what they say. The only parts that feel good are his brief moments of training and the conflict he later has with his father. It doesn’t help that Connor doesn’t really get much chance to

The core gameplay elements of Assassin’s Creed III are flawed too. Combat has been changed up from previous games and doesn’t feel as satisfying. It’s a weird middle ground between the counter satisfaction of Assassin’s Creed II and the more involved combat seen in Assassin’s Creed Unity. Stealth is definitely an upgrade from what the series had seen before though. Climbing is great when you’re in the forest, but the lack of verticality in the cities makes the platforming really uninteresting.

You also have all the annoying Assassin’s Creed staples here. Fetch quests, following targets for what seems like forever and touchy platforming all make Assassin’s Creed III feel aged. Even though the game has a pretty substantial length and is technically full of content, it feels over before it’s even begun thanks to the lack of plot movement and sudden conclusion.

There are some positive points to Assassin’s Creed III, though. It was the first game in the series to introduce naval battles, which later became a really important part of the series. Combat can prove to be fun with the right combination of weapons, and the ideas introduced here are actually pretty interesting. Tree-running, in particular, feels like something genuinely unique to this game and is something I wish they’d bring back into the series.

If you’re a fan of the more than decade-old series then chances are that you’ve already played Assassin’s Creed III before and have your own opinions on it. Unless you like portability, there’s no reason to get the Nintendo Switch version over any other and the game hasn’t really aged well as it is. Both Assassin’s Creed newcomers and series veterans deserve a better experience than this.