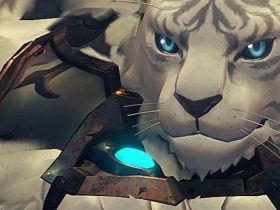 With Jolly Redd now showing up on his boat in Animal Crossing: New Horizons, you will need to quickly learn how to spot the fake paintings and fake statues that he tries to swindle you with.

Before you can set foot on Jolly Redd’s Treasure Trawler, you will first need to speak to Blathers in the Museum. The sage owl will share some good news with you, in that, thanks to your hard work, the Museum will now be able to start displaying fine works of art. If you come to find an authentic piece of art, he’s happy to take it off your hands.

From the next in-game day, Jolly Red should visit your deserted island paradise. In the morning, Isabelle will warn you that a suspicious character has been selling works of art sourced from unknown origins.

When you talk to him for the first time, he will offer to sell you a piece of art for 498,000 Bells. After an exclamatory reaction to the price, he’ll offer you his family-exclusive, patent-pending Cousin’s Discount to lower this to 4,980 Bells.

This is the first authentic piece of art that you will receive, and, once you donate it to Blathers, you will be able to open an Art Gallery in the Musem to start displaying your paintings and sculptures.

From this point, Jolly Redd’s Treasure Trawler ship will start to randomly dock on your island – usually on the small beach to the north. Make a visit and you will be able to purchase more art pieces, although not all of these are genuine and Redd will try to trick you with forgeries.

We have listed the fake statues and fake paintings that you will need to be wary of below, and how you will be able to work out which you shouldn’t buy: