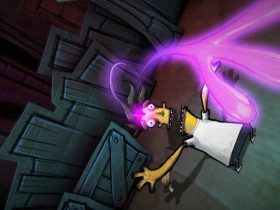 Versus Evil and Breadcrumbs Interactive have announced that Yaga will release on Nintendo Switch next month.

With the developer promising a “darkly funny narrative,” this action role-playing game tells the story of a one-handed blacksmith called Ivan.

Even with his incredibly bad luck, Ivan must take on the near-impossible tasks that the tzar gives him. Baba Yaga, the mysterious witch, watches over his fate as he bludgeons nefarious monsters and legends that take inspiration from Slavic folk tales.

Thanks to a deep crafting system, you will be able to forge lightning hammers, hookshot pitchforks, and other melee weapons in combat – exploring a combination of talismans, magic items, blessings, perks, and curses to “fundamentally change” how Ivan plays.

“Yaga’s unique mix of traditional rogue-like and RPG mechanics, combined with its eye-catching art makes it a game that’s hard to put down,” explains Versus Evil general manager Steve Escalante.

“Presenting an ARPG within the rich Slavic folklore and exploring the history it represents is another distinguishing factor to Yaga. We can’t wait for gamers to play Yaga this November.”

Yaga will release on the Nintendo eShop for Nintendo Switch worldwide in November.