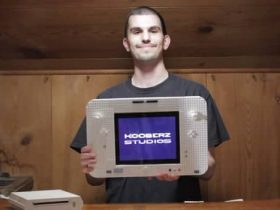 LEGO Wii U is ridiculously cool

Columbus Circle has announced plans to release 8-Bit Music Power, a collection of 12 original chiptunes to be published on a software cartridge for Nintendo’s retro Famicom.

The Japanese company has been keen to clarify that it isn’t a game, but, while not being officially licensed by Nintendo, it becomes the first cartridge to be released for the console in 21 years.

Several thousand copies are to be made, however the cartridge format is different between the Famicom and Nintendo Entertainment System so importers would be required to purchase an adapter in order to play the software.

If there is enough interest, Columbus Circle shared that they would certainly consider making a NES-format version. They also plan to manufacture more Famicom cartridges, more likely to be additional music albums but there is also a desire to make games.

“This was just a project among old Nintendo fans around us,” a spokesman explained to The Wall Street Journal. “We were surprised at the overwhelming reaction we’ve received. Fans and major retailers in the U.S. asked us to make the product available there.”