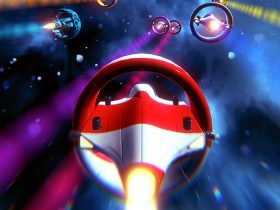 Soar Past The Stars In VSR: Void Space Racing On Nintendo Switch

CIRCLE Entertainment and CreSpirit have announced that 2D retro-styled side-scrolling platformer Rabi-Ribi will release on Nintendo Switch this month.

It stars Erina, whose otherwise unexciting life as a rabbit soon changes when she finds herself in an unknown world where she’s been turned into a human. She soon meets Ribbon, a cheerful pink-haired fairy who chooses to stay by Erina’s side.

Setting out to return Erina home and back to her original form, you will have the freedom to explore your surroundings.

Each character has their own strengths, with Erina focused on combat in close-quarters whereas Ribbon attacks from range – with the chance to unlock new skills and attacks through collecting items and upgrades. There’s also post-game content such as the Speedrun Mode and Boss Rush Mode to sink more time into.

Rabi-Ribi will release on the Nintendo eShop for Nintendo Switch worldwide on October 17th priced at £26.99 ($29.99) and is now available to pre-purchase with a 10 percent discount.