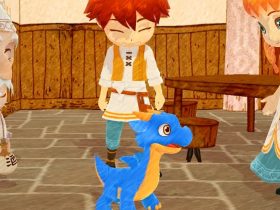 I’ll admit it, Ys VIII: Lacrimosa Of Dana is my first introduction into the Ys world. Aside from the odd name and the fact that it’s clearly a game with a niche audience, I didn’t really know what to expect at first, but I was excited to get stuck in nonetheless. I’m happy to report that while it is a little slow to get going, once it does, it had me hooked.

Despite this clearly not being the first entry in the series, newcomers like myself will have no problem following the story or simply getting to grips with the basic gameplay found in Ys VIII: Lacrimosa of Dana. You can play it as a standalone title, and that is great for everybody because it is a series that has spanned more than 30 years at this point. It’s the first main entry (not that there are spin-offs) in the series to make it to a Nintendo system since the Ys I & II remakes on the Nintendo DS, and even before that, it was a Japan only affair on the big N.

I got the impression early on that the Ys series isn’t known for its grand stories. The basic plot in Ys VIII: Lacrimosa Of Dana isn’t great and it does make the very early moments of the game difficult to stick with. The main protagonist, Adol, finds himself, along with his pal Dogi, on a ship called the Lombardia. The ship is then ambushed at sea by some vicious sea monster, which leads to the ship sinking, leaving all surviving members being washed ashore on a mysterious island, of which some have heard harrowing stories about. 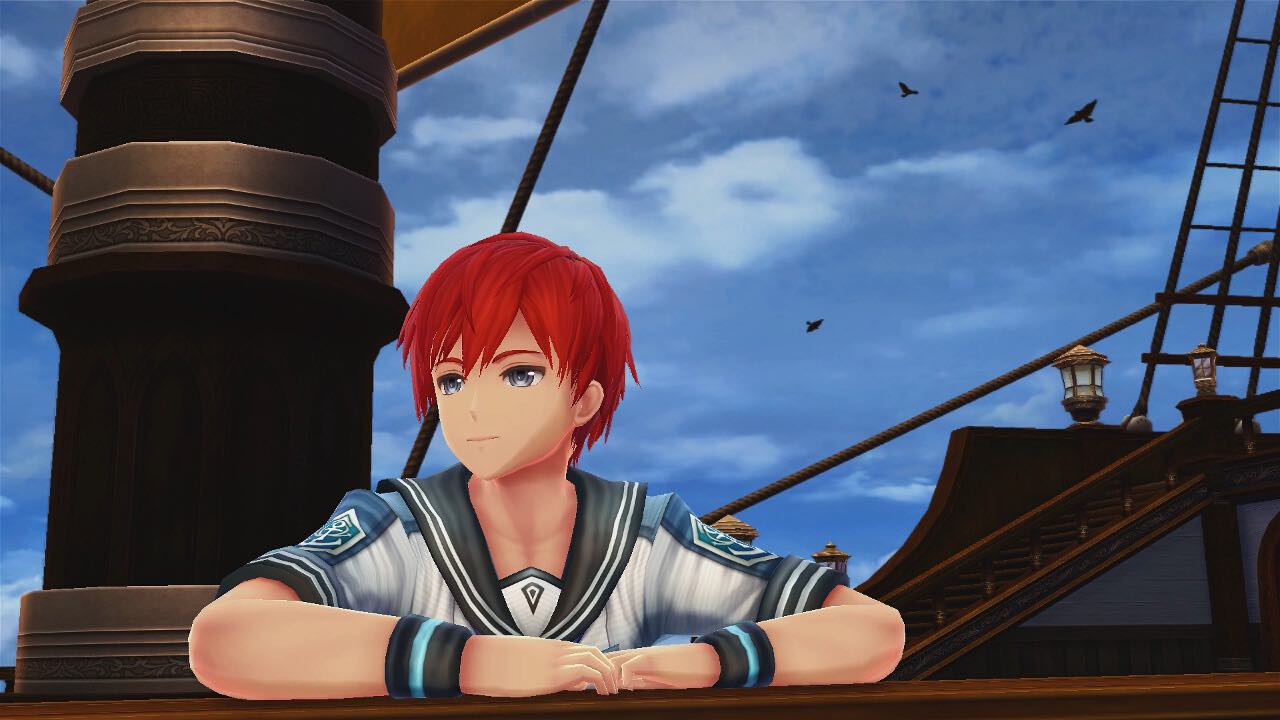 Moving on from the story, the primary duties which you will complete as you’re making your way around the island is building up your basecamp, finding more people that have been left stranded and, of course, uncovering new areas for you to explore. It is mostly a case of, go wherever you want kind of game too, with the occasional inaccessible area in which you need to progress past a certain point before you find a way past. But all in all, I was left free to wander around at my leisure.

Combat felt great to me when it was first introduced. It’s fast and it can be challenging, two important factors for me. However, I did feel that after a time, there did seem to be a little too much button mashing going on when it came to the weaker enemies that need taking out and it was more a case of mindlessly mashing the attack button faster and faster, than actually having to think about it. That isn’t to say I didn’t enjoy it then onwards, because to be fair to the game, it does throw a decent amount of bigger enemies at you, which you can’t just spam the attack button over and over again to kill, as you have to take a more tactical approach.

You can control three characters at any one time, all of which have their own damage type, basically strengths and weaknesses in terms of who they are good at attacking and who they’re not. Adol’s damage type is Slash, which is effective against soft enemies. Laxia’s is Pierce, which is best against aerial enemies and a character like Sahad’s is Strike, which is best against armoured enemies. I often found that having one of each in my squad was the best approach as it meant at least one of them had the advantage at any one time. Although I did constantly use Laxia throughout and ignore everybody else, a quick press of the Y Button and you instantly cycle through the three characters, allowing you to effectively deal the most damage to certain enemies and it also allows you to stay alive if your previous character was about to snuff it. AI handles the other two characters and it is surprisingly good at doing so, not once did I ever feel like I was let down by the other members of the team when I wasn’t in control. 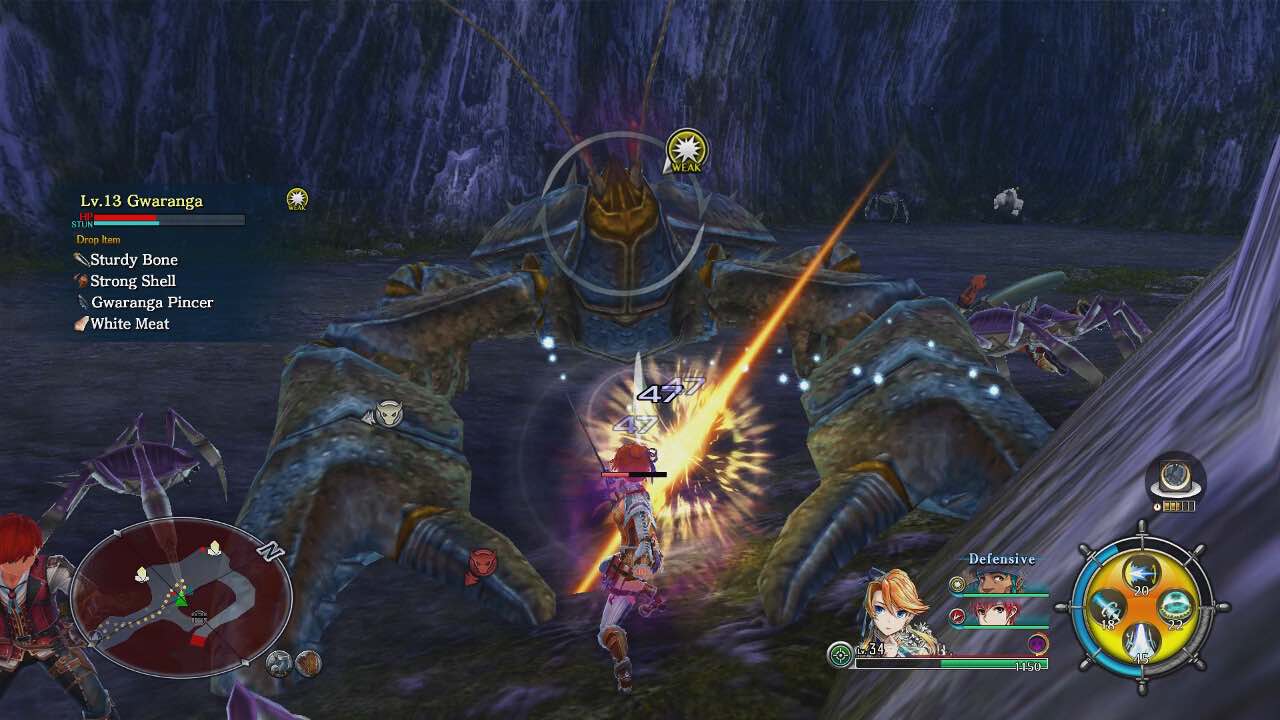 ‘Breaking’ enemies can be a very effective way of overcoming the harder enemies in the game. It involves damage type again and it’s effectively a meter that builds up when you attack an enemy who is weak to your damage type. Once full, it lowers their defense for all of your characters, as well as a couple of other specific things, such as flying enemies not being able to fly anymore. This aspect comes into play and is most handy during boss fights as they are obviously the hardest enemies you will come up against. It is also important to learn how to dodge and block enemies attacks in order to stay alive. Flash Move and Flash Guard work in a similar way to Bayonetta, whereby pressing the dodge/block button at just the right time gives you temporary invincibility and slows enemies down.

There are tons of other smaller elements which flesh out the whole experience so it isn’t just a case of battling enemies and that’s your lot. You have things such as learning new skills, fishing, trading, cooking, finding secrets and weapon enhancing, side quests to prolong the experience and all the previously released downloadable content. Even things like having a map completion percentage make you want to explore all there is to explore on the island, because who doesn’t want to see 100 percent rating.

The game runs pretty well for the most part on the Nintendo Switch. There are a couple of small issues such as if a large enemy is off in the distance, it looks like its moving at about 5 frames per second while everywhere else is still normal. It is quite offputting, but other than that I didn’t really experience much slowdown, which considering this is an open and decent, vibrant looking game, that’s quite unexpected, but kudos to the developer. You can also completely alter what each button is used for, which is a subtle but nice touch that not many games allow you to do.

Ys VIII: Lacrimosa Of Dana is a title that takes a while to get going, maybe too long, which may be enough to put some people off early and the story is rather sub-par. Those that stick with it will see where the game truly shines. It features a seamless and easy to learn combat system that pretty much anybody can get a grasp of, and it also provides quite the backdrop for those wanting to wander off and explore. Sure, it has its problems, but it’s an experience that I won’t forget any time soon.