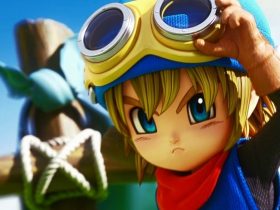 Nintendo has announced that those that participate in an Online Tournament in Mario Tennis Aces next month will unlock Dry Bones.

The skeletal Koopa Troopa is a Tricky character and can be unlocked early by competing on the court in a single match between Wednesday 1st May – Saturday 1st June 2019.

Worry not, though. If you can’t participate in an online tournament, Dry Bones will be unlocked for all players on the first day of the following month.