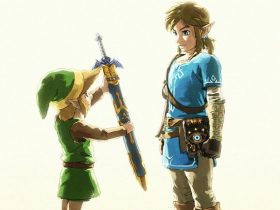 Nintendo Say Thanks With Free The Legend Of Zelda: Breath Of The Wild Wallpaper

Nintendo UK has revealed pre-order bonuses for Yoshi’s Crafted World, for those that choose to buy the side-scrolling adventure from the Nintendo Official UK Store.

Those that are looking forward to exploring the game’s diorama-like world can choose to receive either a Yoshi’s Egg 3D Keychain (£49.99) or Yoshi’s Egg Backpack (£59.99) with their pre-order.

In Yoshi’s Crafted World, you will have the chance to explore a big world that’s crafted from household items like boxes and paper cups, solving puzzles and discovering hidden treasures in the themed stages that you wander.

That can see you rafting, racing solar cars, tearing through the sky on a plane, or experiencing many other wild and surprising gameplay sequences.

These stages can also be flipped, letting you play them backward to provide new perspectives and the chance to find Poochy-Pups that are hiding around the course. And, of course, there’s the chance to team up with a friend in two-player co-op.

Yoshi’s Crafted World will release exclusively for Nintendo Switch worldwide on March 29th, with a free demo now available on the Nintendo eShop.