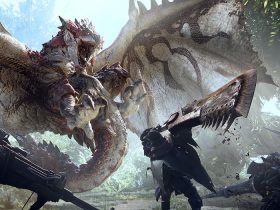 Capcom On Why Monster Hunter: World Is Not On Nintendo Switch

Yomawari: The Long Night Collection follows suit when it comes to horror games of recent years. Not in terms of perspective or necessary even in its gameplay, but by simply eliminating any way of the player fighting back against any enemies. Amnesia pretty much started this craze and it has been an ongoing thing in recent times.

As the name suggests, this is a collection, consisting of the two Yomawari games released thus far, Night Alone and Midnight Shadows. I had no idea what Yomawari was before starting the game up on my Switch, it had completely passed me by. At first glance, one might be mistaken for thinking this is much more of a family-friendly type of game, given the cutesy visuals on show, but that could not be further from the truth. Right from the off, you are greeted with heartbreak and you quickly realise that Yomawari has a very dark tone indeed.

Both games feel very similar indeed and that is because they are practically one and the same in terms of gameplay and mechanics. There’s not really all that much difference between the two games and as such, it doesn’t really matter which order you play them in. Because of this, I will not be splitting up the reviews as I usually would for a collection, rather just point out any small differences as I go along, such as the story.

Even then, the story in both games feel very similar too. In Night Alone, you must search for your sister, who has not returned after searching for your missing dog, Poro. In Midnight Shadows, the story centres around two characters, Yui and Haru, who are best friends. Yui goes missing on their walk back home and it is up to Haru to find her. Both settings have a very similar theme and they both feature narrow, corridor-like areas where enemies can trap you.

The conflicting enemies you will encounter throughout each game are downright ugly, but in a good way. I honestly love the designs of the enemies in both games, simply because they are so disturbing and weird. When a giant spider-like monstrosity is coming at you with an oversized face on top of its body, and your gut instinct is to run as fast as you can in the opposite direction, you know the game has done its job. They are so different to the types of creatures you are used to seeing in other horror games, which certainly help them stand out in the crowd.

As I mentioned earlier, there is no way of fighting back against the various monsters and enemies you encounter, so you either have to run or hide. Certain enemies can move faster than you can ‘normal’ speed, which means you have to run away (Sprint). However, you have a stamina bar to stop you from spamming the run button and getting away easily every time. It makes you be very cautious when and how often you press the run button during general exploration, as you don’t want to be left caught out when an enemy pops out at you. You can also throw stones to distract enemies too, but I found that I personally underutilised this as an option for the most part.

There are also plenty of bushes around town that you can hide in, if running either isn’t an option, or if it’s the wrong option. When hiding, you cannot see anything, other than a red cloud indicating where the enemy is, so you know if it is getting closer or further away. Tying all of this together is a heartbeat sensor, which work whether you are out in the open or simply walking around. The heartbeat sensor is a low pounding sound (and vibration on the controller) that increases in both regularity and volume, the closer enemies draw near. This certainly helps create tension as you might not even see the enemy, yet the heartbeat sensor is going crazy, so you will anticipate something happening any second.

While it’s not necessarily a bad thing that both games are very similar, there is one major drawback, that being the surprise factor. After you have played through one of the games and then go to the other, a lot of the stuff in there that you would not have expected simply does not have the oomph it would have done had you played that game first, as you are now expecting them to happen. Of course, the aforementioned monsters is one of them and another is some of the story elements that happen.

There are no real penalties of dying, which has knock-on effects in particular aspects of the game, good and bad. For example, some sections – especially later in the games – seem so unfair that death is a certainty. It’s almost like it’s a trial and error approach at times and it doesn’t help with the immersion. Having said all of this, the one good part is there are no annoyances for the player when these inevitable deaths occur, but it could have been handled better in the first place.

As alluded to earlier, simply by looking at these games, you would not immediately think these are horror titles, because Yomawari is presented in such a wonderful and charming art style, with almost chibi-like characters. It seems strange to see, but the mix of innocent-looking characters and disturbing and unsettling looking monsters actually work. Since they are so contrasting, it makes it even more disturbing.

While the scope is a bit bigger in Midnight Shadows, both games are bite-sized, coming in at around 5-7 hours each which I think is a good amount of gameplay for your money. You can finish the game much quicker than that if you only play for the main story. If you want more, then both games feature plenty of collectables to find and even some sidequests. The sidequests work a little different here than in most games, whereby they would usually be given to you by an NPC or something like that. Instead, you find a random item lying around, for example, and you go from there. It doesn’t really give you a whole lot to go off and that’s not a bad thing, as they are executed well and while they aren’t required, they do help extend and flesh the story out a bit more.

Featuring a unique blend of horror and a charming, chibi-like art style, Yomawari: The Long Night Collection is a decent two-game bundle that fans of the genre will enjoy. The monsters you encounter on your journey will scare the hell out of you. Having said that, the trial and error elements hinder the experience, as does the general scare factor once you get into the second game.