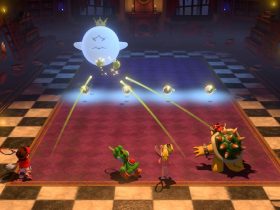 LEVEL-5 has released the Yo-kai Watch 4 trailer that was first shown at Tokyo Game Show 2018, as well as a 10-minute gameplay video that shows the Nintendo Switch exclusive in action.

In the role-playing game, Yo-kai Watch Shadowside: The Return of the Oni King movie protagonist Natsume Amano, Shin Shimomachi from the upcoming Yo-kai Watch: Forever Friends movie and Yo-kai Watch series protagonist Nathan Adams use Yo-kai Arks, which act as keys that can open doors to other worlds.

These Yo-kai Arks were first introduced in the Yo-kai Watch Shadowside series and represent the feelings that connect Yo-kai and humans together.- a reward for those that help Yo-kai when they need assistance.

Yo-kai Watch 4 will release exclusively for Nintendo Switch across Japan in Spring 2019.