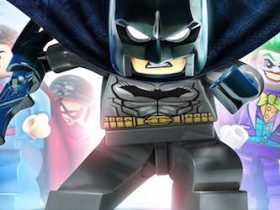 The original Wii Play proved to be quite the popular title when it first released back in 2006, and happily boasts a worldwide sales figure that now exceeds an impressive 27 million copies. Amidst the buzz that surrounded the launch of Nintendo’s Wii platform, it proved to be a perfect extension to that offered by pack-in software Wii Sports – offering consumers a selection of mini-games to enjoy with their family and friends, whilst providing a necessary opportunity to pick up an, at the time, elusive additional Wii Remote.

In concept it was a decidedly simple, attractive package that was used to demonstrate the various ways in which the motion control capabilities of Nintendo’s innovative Wii Remote could be employed, through a series of fun, accessible mini-games. Such a concept returns some four years later with Wii Play Motion, this time serving up twelve mini-games that are this time designed to utilise the elevated level of precision granted by Wii MotionPlus.

Whilst up to four players can get in on the action this time around, you’ll need to either equip yourself with the standard Wii Remote + Wii MotionPlus attachment or the newly introduced Wii Remote Plus that already houses the enhanced tech inside it. Handily, Nintendo have seen fit to bundle a single, strikingly red Wii Remote Plus with the game, ensuring that at least one player will be able to wag, twist and turn to their hearts content. 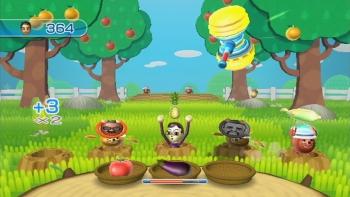 Only four of the mini-games will initially be available to you when starting the game, with the other eight able to be unlocked through your natural progression. Of the first four, Cone Zone and Pose Mii Plus are particularly enjoyable – the former seeing you scoop a mountainous quantity of ice cream as you seek to maintain your balance in keeping it upright, whereas Pose Mii Plus bears a close resemblance to ITV’s ‘Hole in the Wall’ and challenges you to rotate your Mii character to match the shape on the incoming barrier. Skip Skimmer, where you choose stones and fling them at a lake to see how many times you can get them to bounce, and Veggie Guardin’, a disappointingly mediocre ‘Whack-a-mole’ style mini-game, round off the four.

From this point, things progressively get more enjoyable rather than deteriorating into lunacy!

Next up is Trigger Twist, tasking you to shoot an increasingly difficult number of targets, and Jump Park, in which you propel your Mii from springboards as they aim to collect as many gems within the time limit. Teeter Targets requires you to hold the Wii Remote sideways and to then tilt it as you aim to propel a ball into specified targets, but it is Spooky Search the becomes a highlight of this quartet, challenging you to slowly cast the Wii Remote Plus around you as your scour for ghosts off-screen, carefully listening to the Remote’s speaker, and an on-screen Mii crowd, for guidance. It’s particularly clever, and stands out as one of the strongest offerings within Wii Play Motion. 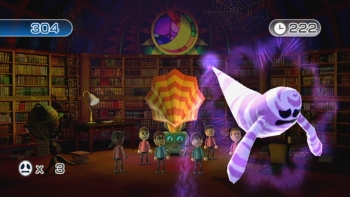 Lastly, you’ll find Wind Runner, Treasure Twirl, Flutter Fly and Star Shuttle. Wind Runner sees your Mii strapping on a pair of roller skates as they use the power of a breeze and implementation of an umbrella to guide them along a course, whereas Treasure Twirl will see you use the Wii Remote Plus as a winch as you guide your Mii underwater – dodging obstacles and creatures as you aim to collect and return a number of treasure chests. Flutter Fly sees the controller turned into a fan as you waft a group of balloons along a hazardous aerial course, whilst the final game, Star Shuttle, will see you implement thrusters as you guide your craft towards a large target on the underside of a spaceship.

Of course, twelve mini-games may not seem like a lot at face value, but a number provide varying modes that further diversify the content on offer, be it a Versus Mode or something that alters the core gameplay objective such as ‘Long Jump’ in Wind Runner, where you must build up a fast speed to then propel yourself off a ramp to reach the furthest distance possible. Replayability is further available through attempting to better your high scores in an effort to achieve the more prestigious Platinum Medals, although whether you’ll be so persistent is dependent on the player.

Additionally, there are also a number of hidden features for those that leave their Wii Remote Plus dormant on the Title Screen. Whilst mere distractions from the central package, their inclusion serves to continue to extend the experience beyond that purely demonstrated by the mini-games on offer. These include a Kaleidoscope that reacts to the user tilting the controller, producing a jingle through the Wii Remote Plus speaker as you do so, and a Bubble Maker. 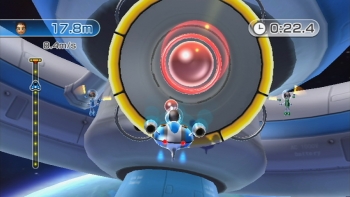 So, Wii Play Motion proves to be every bit as enjoyable a family-friendly package as its predecessor, with a blend of imaginative, fun mini-games. However, whilst becoming another welcome introduction to the possibilities of Wii MotionPlus, it also acts as a reminder that the technology hasn’t been particularly well-utilised by developers since it was introduced two years ago.

Also, in the wake of Nintendo announcing the Wii U, it seems particularly odd that such a key MotionPlus push is occurring so late within the Wii life cycle. Regardless, for those looking to purchase a Wii Remote Plus, it’s certainly worth spending the extra £5 to invest in this.