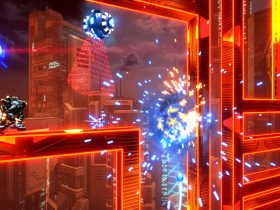 Destroy A Computer Virus In Exception On Nintendo Switch This Summer

This two-day tournament will see three-man teams from across Europe fight it out for the chance to compete at the Super Smash Bros. Ultimate World Championship 2019, which will be held in Los Angeles on Saturday 8th June.

For those that can’t be in the audience, Nintendo has you covered in letting you watch the action as it unfolds on their official livestream.

The first livestream will be broadcast from 10am BST (11am CEST) on Saturday 4th May, with YouTube or Twitch as your options.

And then the second will start from 10am BST (11am CEST) on Sunday 5th May, which, again, will be streamed on YouTube and Twitch.