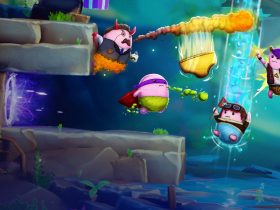 CIRCLE Entertainment and Lose have announced that Maitetsu-Pure Station will release on Nintendo Switch.

You play as Migita Sotetsu in this visual novel, who, after hearing that about a proposal to build a mill factory along a landmark river in Ohitoyo, decided to return to his hometown to change the minds of those in charge.

While half of the town’s citizens support its construction, the other half fear that it will pollute and contaminate the river.

Soon recognizing how Ohitoyo’s budget has decreased in the last few decades, Sotetsu believes that the town requires a system that will let it become financially independent – rather than relying on the factory to stimulate its economy.

In this time, he comes across Hachiroku – an android-like being called a Raillord – while looking through his adoptive father’s belongings. They forge an unlikely connection, and, thanks to that bond, start to work together with the hope of restoring Ohitoyo to its former glory.

Maitetsu-Pure Station will release on the Nintendo eShop for Nintendo Switch worldwide in 2019, and will have full Japanese voiceover, with Chinese, English, and Japanese subtitles.