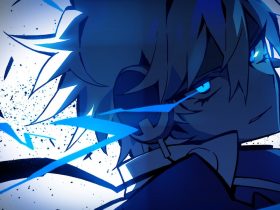 Ratalaika Games and Man-Eater Games have announced that Blind Men will release on Nintendo Switch this week.

This spy fiction parody is a boys’ love visual novel about Keegan, a young supervillain who wants to carry out his first heist.

As the nephew of a retired supervillain, Keegan wants nothing more than to become one himself. However, to complete his application to join the League of Evil he will need to commit a crime.

The visual novel has two romanceable characters and multiple endings to reach based on your choices, with the experience backed with a “catchy” soundtrack.

Blind Men will release on the Nintendo eShop for Nintendo Switch worldwide on 17th April 2020.