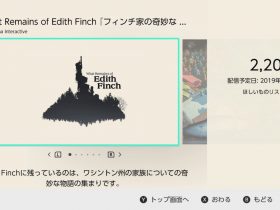 What Remains Of Edith Finch Out On Nintendo Switch Next Week

Draw Distance has announced that Vampire: The Masquerade – Shadows Of New York is in development for Nintendo Switch.

This visual novel is a standalone expansion and companion to Vampire: The Masquerade – Coteries of New York, and has looked to tackle themes of personal and political horror.

After New York’s Anarch leader meets a gruesome end, you are the one chosen to investigate. It is an obvious trap, and another move in the game of Jyhad – the eternal struggle for power between warring vampire generations.

You are from the Lasombra clan where failure is not an option, meaning that it is up to you to work out the solution to an otherwise unsolvable crime.

Vampire: The Masquerade – Shadows Of New York will release on the Nintendo eShop for Nintendo Switch worldwide in 2020.