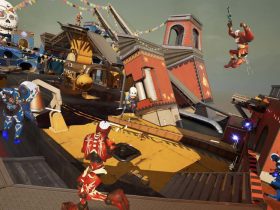 LEGO Worlds presents a chance for players to explore, discover and create together, and it is coming to Nintendo Switch.

With the freedom to build anything and go anywhere with friends in either split-screen or online, you can create your own adventure as you set out on your quest to become a Master Builder. You can choose to build brick-by-brick, placing down enormous pre-built LEGO structures or by using tools that will help players paint and shape the landscape around them.

Once happy with their creations, players can then look forward to exploring each other’s worlds online, creating together and engaging in both cooperative and competitive multiplayer.

“Currently we have announced that we are planning to release LEGO City [Undercover] and LEGO Worlds on Switch,” TT Games head of design Arthur Parsons wrote, asked as to what LEGO-related plans the developer had for Nintendo Switch.

LEGO Worlds will release on PlayStation 4, Xbox One and PC worldwide on February 24th, with a Nintendo Switch release later on.