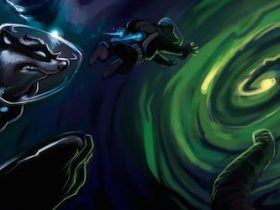 When evil killer robots slay the last human, it falls to you as the one remaining humanoid battle droid to avenge them.

Curve Digital have confirmed that they will release Puppygames’ hypnotic twin-stick shooter Ultratron on Wii U next week, described as “a homage to the 80s arcade machines of years past.”

Players will boost their battledroid’s combat prowess with power-ups and deadly pets, annihilating ‘bots of the Apocalypse Ieiunitas, Bellum, Lues and Letum in glowing neon levels on their quest for vengeance.

You can look forward to a retro-futuristic soundtrack and stylised graphics, with a player responsive difficulty and tactical system delivering a pure dose of arcade action.