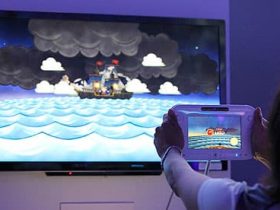 Ubisoft have stated that they are prepared to “absolutely take advantage” of the digital strategy that Nintendo will undertake for the Wii U, using lessons learned from the PlayStation Vita to ensure success.

“We’ll absolutely take advantage of whatever the policies will let us do with the platform from the standpoint of providing digital content”, Chris Early, Ubisoft’s Vice President of Digital Publishing, explained to Eurogamer.

“Nintendo has not announced a lot of their digital programs at this point of time. Our key is, as you see from us from a content perspective in supporting the platform, is we’re going to be there like we were with the Vita, and support the policy side of it as well.

“With the Vita all of our games are available digitally, and they’re even optimised from that standpoint because that was a policy in place we were able to design to.

“So from the same standpoint, I expect when the Wii U comes out and there are digital policies that are there, we will be in support of them as well”.

Earlier in the year, Nintendo provided the first information regarding the introduction of their Nintendo Network, which promises a substantial improvement to the company’s ventures into the online and digital market.

With Ubisoft currently working on a range of software for the console, such as Assassin’s Creed III and Tom Clancy’s Ghost Recon Online, Early confirmed Ubisoft’s ultimate aim was to ensure that players would be able to buy content however they wished.

“I just want you as a player to be able to get our content however you want to”, he discussed. “I don’t really want to penalise you for wanting to get it digitally, or penalise you for wanting to get it physically. Whatever your choice happens to be. Because I know retailers will get a certain type of customer that maybe can’t pay online. So there’s always going to be a reason there, right?

“And the discoverability process is one we’re still struggling with on the digital market. You have a long tail where there are all kinds of products you can get to, if you can figure out which one you want. But the flip side is the problem with the retail level, which is, you can walk in and see all kinds of products for a brief period of time, because then shelf space has to change and turnover and the product I wanted from last month might not be there anymore.

“So each channel has its challenge. Our challenge as a publisher of content is, how do we make sure you as a player can get it wherever. We will see an on-going evolution of content available digitally. I don’t think that will be to the exclusion of other ways of giving the content”.

Nintendo are to launch the Wii U later this year.