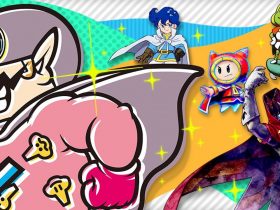 “Roll patiently and persist.” It was such advice early on in TumbleSeed that had calmed me in that moment. For while the little seed that is placed in your care had dared to dream big, it’s easy to see that it was perhaps unaware at how perilous a task it had taken on.

This “rolly roguelike,” as developer Team TumbleSeed affectionately puts it, is a chaotic wonder to behold in motion. With the unassuming seed woken when the player gently lifts it out of bed with a long vine, its village soon becomes victim to a ground dweller attack. With destiny calling it to fulfil a long-spoken prophecy, it is down to you to help carry it to the mountain’s peak where once planted, it is said that it will restore order and balance to the world.

It is the journey to that peak that seems an insurmountable challenge, as you lift the seed along a path riddled with holes, marauding monsters and other dangers that forever threaten to prevent it from succeeding.

If you take a look at Ice Cold Beer, it is clear to see where the inspiration for TumbleSeed had first sprouted from. Taito’s mechanical arcade game had challenged players to wield two joysticks that let them control each end of a metal bar, on which a small ball would roll back and forth. With the playing field peppered with holes – to suggest bubbles rising in a beer glass, no less – players would have to carefully guide the ball to a specific hole that had been highlighted. What followed was a fraught experience as you steadily elevated the ball, steering it away from harm, and, if you managed to reach the goal, you would return to the bottom with the game locking in a trickier target.

That setup is largely replicated here, in essence, although we’re allowed to play in a more fantastical setting that is wondrously packed with kaleidoscopic colour. The Left Stick and Right Stick will let you lift and lower either side of the VineGuard, and, beyond that, the only other input that you really need is the A Button. But, more on that later.

With players first collecting the heroic seed at its home, the developer welcomingly provides you with enough of a chance to get used to how everything controls, while a tutorial will talk you through the basics.

There isn’t that much to it, being an experience that is easy to pick up but deviously tricky to master. But, the most important mechanic that the Bootcamp will teach you revolves around crystals.

In looking to help your ascent, the minuscule seed can become empowered. At the start, you will receive FlagSeed, ThornVine and Crystal, which, collectively, form the basis for the experience.

As you wind your way up the mountain, you will repeatedly come across small plots of soil. These can be used with any of your powers, as long as you can roll over them. With the FlagSeed equipped, you can plant a flag in the plot of soil that will save you from tumbling further down the mountain when you take damage. Whereas ThornVine, as you can perhaps gather from the name, will let you surround the seed with protective thorns that can destroy any corrupted creatures that come too close.

There are far more powers in the game, which include: the spring-powered BounceBerry that lets you leap great distances; FloodFruit, that fills otherwise perilous holes with water; or FlailFlower, a crushing wrecking ball that swirls around the seed and destroys any enemy it collides with.

HeartSeed is perhaps the greatest help, in allowing you to restore your heart meter – as you will have to start your quest over from scratch once you take damage three times, otherwise. Those that fear repetition after defeat need not fret either, with the mountain procedurally-generated each time that you set out to save your home.

These powers aren’t infinite, however. You must collect crystals in order to unleash them, but that’s where the Crystal power comes in. This doesn’t require anything to use and will reward you with crystal shards once it is used on three plots of soil.

Given how unpredictable TumbleSeed can be, your reliance on these powers can become more dangerous than it is worth at times. Plots of soil can be placed in hard to reach locations, and the powers themselves, such as the explosive BombBud, is as much a threat to you as it is to the monsters that hound you.

But, that is where the game cracks what many struggle to. Mirth. Sure, it can often feel frustrating, but there wasn’t a time where I didn’t simply laugh off my mistake and try again. The error was always my misjudgement, and I never felt cheated by whatever had cut my journey short. And while TumbleSeed may be positioned as a single-player experience, you can detach the Joy-Con and pass one to a friend to see how well you can coordinate your efforts to keep the seed from harm. It’s hilarious.

There’s much more to say, from the villages that you come across and the seeds that inhabit them, to the upgrades that you can buy, the archery ranges that you can participate in, and the mysterious diamond-shaped holes that you can safely fall into where VineGuard that help you unlock new powers can’t help but pop a joke. It’s certainly a game with a quirky personality but has a world that you will enjoy rolling around in.

I can talk about the eye-poppingly stylised visuals and wonderfully enchanting soundtrack, but where Team TumbleSeed has truly set a new benchmark is with HD Rumble. This lets you feel the seed roll, increase in speed and slam against an obstacle, and there has been a clear effort to implement it that I have to applaud, as the tactile responsiveness is an absolute marvel.

TumbleSeed is unlike anything that you have ever played before and exemplified the experiences that we all want to see on the Nintendo eShop. The game’s creative spirit is as brave as the heroic seed that inhabits it, with an addictive loop that promises to keep you forever tumbling.