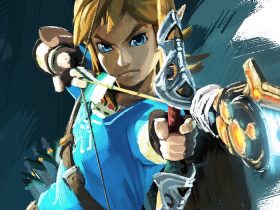 The Legend Of Zelda: Breath Of The Wild Update Version 1.5.0 Now Available

Modus Games and Frozenbyte have announced when Trine 4: The Nightmare Prince will release on Nintendo Switch.

After years spent apart, Amadeus, Pontius, and Zoya are reunited when the Astral Academy requests their help to find Prince Selius. His dark nightmares have started to become reality, wreaking havoc upon the world.

With an enriched combat system and new skills to unlock, there’s also the chance to play co-operatively with up to four players in local or online multiplayer.

Those that pre-order the game at retail (or on the Nintendo eShop, I assume) will receive the Toby’s Dream downloadable content at launch.

This bonus in-game level stars Toby the dog, who, previously seen in Nine Parchments, sets out on his own adventure in Heatherwood Hall with the Three Heroes to uncover the treats hidden in the castle and its gardens.

Trine 4: The Nightmare Prince will release at retail and on the Nintendo eShop for Nintendo Switch worldwide on October 8th, priced at £29.99.