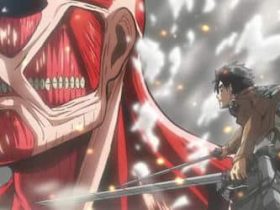 Attack on Titan: Humanity in Chains delayed in Europe due to copyright claim

Raising the topic of Tom Clancy’s Splinter Cell: Chaos Theory during a conversation with any group of seasoned gamers will undoubtedly result in an incredibly positive response. The third title within Ubisoft’s popular stealth-action series, which originally debuted across Windows, PlayStation 2, Xbox and Gamecube formats, is often regarded as Sam Fisher’s finest outing amongst fans – a sentiment that I myself share.

Therefore, I greeted the news that Ubisoft was to re-work the game as a launch title for the Nintendo 3DS with incredibly mixed feelings. Being able to experience such a classic with improvements and the addition of stereoscopic 3D was enough to excite me, but I, like many, was increasingly worried that it would fall into the same pitfalls as its previous handheld iteration on Nintendo DS. Those fears have unfortunately been justified.

For those unfamiliar with the narrative, Splinter Cell 3D‘s plot revolves around Sam Fisher on the hunt of the Masse Kernel’s used by former Georgian President Kombayn Nikoladze in an attempt to attack America’s infrastructure.

Having been sent to rescue Bruce Morgenholt, a computer programmer who worked on deciphering Phillip Masse’s weaponized algorithms as part of “Project Watson,” Fisher finds that the Peruvian separatist group called “The People’s Voice”, led by Hugo Lacerda, have killed him. It, therefore, falls to him to prevent the use of the remaining Masse Kernels, touted as being the super-weapon of the 21st century, before they fall into the wrong hands. 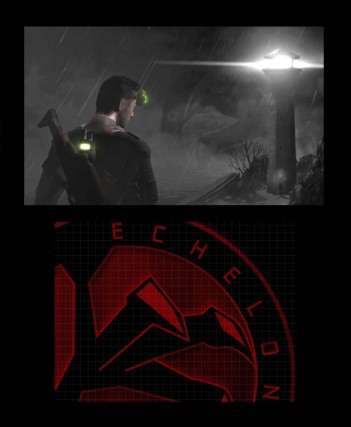 During each mission, you’ll find yourself tasked with completing a series of Primary and Secondary Objectives, yet you’ll only need to prioritise the former to allow you to then navigate your way to the extraction point to move onto the next. The mission structure itself is well-varied, ranging from eliminating a specific target to more tactical elements such as hacking a number of computers to plant fake e-mails.

Progression through the game will reward you with the opportunity to gain further weapon attachments, such as the Foregrip, Sniper or Shotgun, or additional equipment including Wall Mines, Frag Grenades and Smoke Grenades. It’ll ensure that you are constantly finding new ways to overcome enemies, whilst still remaining to be as covert as possible.

Sprinkling a little variety to play is the lock-picking and hacking mini-games, the first of which sees you slowly rotate the Circle Pad until you hear it click before repeating until you’ve bypassed the lock. Hacking, on the other hand, requires a lot more thought, with the player being tasked with matching a shape on the upper screen with a missing cross-section on a cube found on the touch screen.

Controls, whilst adequate enough, feel as a whole entirely too cumbersome, enlisting the aid of the Nintendo 3DS’ Circle Pad for movement whilst the player manoeuvres the camera with the A, B, X and Y buttons. The D-pad is then utilised to make Fisher jump, reload, to alternate between crouching/standing and which shoulder the camera looks over whilst aiming whichever weapon you equip – the two shoulder buttons being used for primary and secondary fire. With such a setup, you’re then free to use touchscreen controls with your thumbs which are the only commendable aspect. In short, it’s just not a comfortable fit and makes for a particularly awkward experience. What’s worse is that there aren’t even any alternate control schemes provided through the options, so you’ll just have to be persistent in an attempt to get used to it. 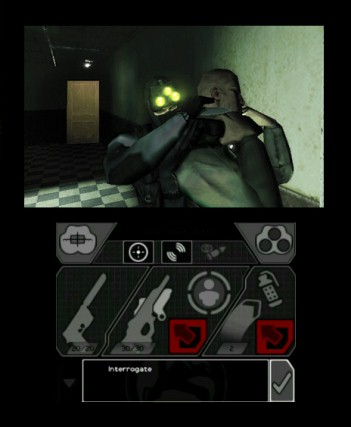 Use of the touchscreen also provides some ease to proceedings, allowing you to quickly switch weapons and goggle settings, as well as including context sensitive menu’s for you to interact with various doors and equipment during missions.

A number of Fisher’s signature moves return such as the Split Jump, yet whilst you are able to stealthily move with your back against the wall, there is no ability for you to be able to pop around corners to quietly dispose of your enemies. Combat, therefore, at times, becomes unbelievably frustrating, relying on the player to strafe around any corners they encounter, risking the chance of taking damage unnecessarily or even being killed in the process. Annoyance continues to heighten when you are unable to respond quickly enough to such situations, meaning that the enemies will more than likely run for the nearest alarm. It begins to make Splinter Cell 3D feel far more like a third-person shooter than one that further builds on the series’ acclaimed reputation for providing unique, engaging stealth gameplay.

The lighting mechanics themselves, which play such a fundamental role in the Splinter Cell series, aren’t particularly well implemented either. Often, even grazing the luminescent beams of the nearest light source will often cause you to immediately be lit up like a Christmas tree, and even when concealed completely in darkness enemies are still able to spot you on occasion.

In relation to this, even tactically taking out lights so that you can remain in the shadows becomes a chore, as the majority you encounter are neither able to be temporarily disabled using the Pistol’s Optically Channelled Potentiator (OCP), familiar to series veterans, or even possible to be permanently destroyed with a bullet. This is due to certain lights being shielded by “protective coverings,” available for purchase from your nearest B&Q to hamper the progress of any local Third Echelon operatives. There’s just too much missing potential enjoyment here. 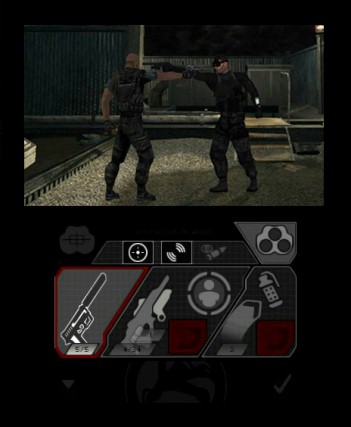 Then again, it isn’t all bad. The addition of stereoscopic 3D works particularly well in enhancing the title visually, especially in regards to the appearance of your objectives within the environment à la latest Xbox 360 and PC instalment, Splinter Cell: Conviction. In relative terms, Splinter Cell 3D could have been vastly improved by incorporating the ‘Mark and Execute’ mechanic first seen within Conviction, yet it is absent. The only further innovation is being able to move the Optic Cable, whilst in use under a closed door, by tilting the handheld from side-to-side.

Another notable absentee is the co-operative and competitive multiplayer modes from the original game, that even made their way into the original 2005 Nintendo DS port. Even with vastly improved online services, alongside both StreetPass and SpotPass hardware functionality, there is nothing provided to expand the game, further insinuating that it has perhaps hit retail long before it was ready. Beyond the completing the campaign there isn’t much that will ensure that you return to the title, causing it to become an increasingly lacklustre offering amongst the launch line-up.

It is inconsistency in design that makes for an experience that never truly excels on the Nintendo 3DS, and is sure to be a tremendous disappointment to long-term fans. Ultimately, the bottom line here is that the handheld is easily capable of far more than this, and as such has failed to be utilised in such regard. There is no doubt in my mind that an entry in the Splinter Cell series built for the system could work exceptionally well, but this, regrettably, isn’t such a title.