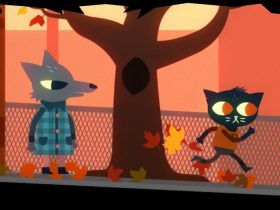 Numskull Games and Dinosaur Bytes Studio have revealed that Clive ‘N’ Wrench is in development for Nintendo Switch.

This 3D platformer takes inspiration from genre classics such as Spyro the Dragon and Jak and Daxter, and, after hopping into a 1950s fridge, will let you set out on an adventure through time and space.

Clive and Wrench are a rabbit and monkey duo who must jump, roll, hover, and spin their way through their quest to undo Clive’s cousin Nancy’s mistake and ultimately thwart the tyrannical Dr Daucus.

With characters from the modern-day and throughout time, you will explore 11 levels connected by a hub world that will take you right from the prehistoric ice age in Iceceratops, through ancient Egypt in Tempus Tombs, and even all the way through to the old west in The Chimp, The Bag, and the Bunny.

“I’m really excited to be able to bring Clive ‘N’ Wrench to the platform I easily get the most requests for, not only that but on a cartridge too”, explains lead developer Rob Wass. “It’s a childhood dream come true, in more ways than one.”

“Taking inspiration from some of the classics of that genre, with plenty of original ideas of its own, we couldn’t be happier to work alongside Rob Wass to bring his exceptional work to the limelight after 9 years in development.”

Clive ‘N’ Wrench will release as a console exclusive for Nintendo Switch worldwide in Winter 2020.