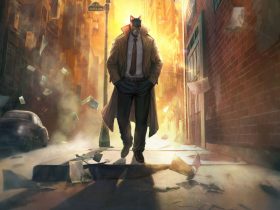 Blacksad: Under The Skin Coming To Nintendo Switch On September 26th

Released early in 2017 on other consoles, The Sexy Brutale was a bit of a sleeper hit that many overlooked or just didn’t have time to experience, which you can understand in what was one of the best years for gaming. Now, it has its chance to shine on Nintendo’s hybrid wonder. Looking from afar, you may think that this seems like your run of the mill murder-mystery game, but dig further and you’ll find a deep game filled with an intriguing story, a unique art style and a Groundhog Day style feature that is surprisingly well executed.

Before I go on, for the majority of my time with the game, it suffered very, very heavily with performance issues. I’m not usually one to let slowdown or a few bugs here and there hamper my experience with a game, but at times it was that bad the game slowed down to a snail’s pace and completely took me away from the experience and the immersion of the game. Thankfully, a patch has been released and has addressed a lot of the performance issues I had, but as I say, a lot of my time playing was before the patch was out. So just keep that in mind going forward in the review, although I have changed the review to reflect this update.

In The Sexy Brutale, you take control of Lafcadio Boone, who wakes up during a party at a casino mansion (sounds like a standard night out). Each guest at the party is being murdered by the mansion staff and if that wasn’t bad enough, once the clock strikes midnight, time reverts back 12 hours to midday and the same set of events unravels all over again. You must discover why the staff have all gone crazy and turned into murderers and work out how to prevent such murders from happening.

The first murder of the game acts as the tutorial and, as such, it is pretty much explained to you as you learn the basics that, going forward, the game will expect of you. You watch a character called Reginald Sixpence get shot, time reverts, the game then tells you how you need to go about preventing jolly old Reginald from popping his clogs. In order to prevent this murder from happening (and all other murders throughout the game) you must spy on guests and put the pieces together so that you know who is going to die, how they are going to die, who is going to kill them and what needs to be done in order to prevent the murderer murdering the guest. Because of this, there is a lot of trial and error at hand, which you will either enjoy or hate.

Exploration plays a key part here too, and with each item that you find in the casino, you must somehow work out how that will help you prevent the murder. If we take the tutorial level as the example, you must switch out the bullet in the shotgun, which you find out to be the murder weapon, and replace it with a blank. Thus preventing Reginald being shot. When you prevent such murders from happening, the victim will remove their mask and allow you to take possession of it. In turn, this enables new abilities that you need to use as you make your way through the game and onto the more complicated murders.

Travelling back in time is the main gimmick here as I have alluded to already. Even though the word gimmick can often have a bad connotation to it, I mean it in a good way because, again, the developers have clearly made it work really well. After the first murder is prevented, your watch, which is what allows you to travel back in time, is fixed and now allows you to manipulate time further, in a way that’s very similar to Majora’s Mask.

While you are roaming around the casino, trying to figure out what you need to do, you are able to wander around freely, but you are not able to go into any room that a guest with a mask is present in, because you would then be attacked. To prevent this, you can hide in closets, peek through keyholes to see into the next room and you are also able to listen to footsteps and other noises coming from the various guests, so that you have a rough idea of where they are and which area to avoid. The moving around from room to room reminded me of Luigi’s Mansion, which is no bad thing, and fans of those games will enjoy that aspect of the Sexy Brutale, for sure.

The look of the game is very unique, the diorama style scenes and the general look of the environments and characters aren’t used all that often. It isn’t the best looking game you’ll find on the Switch however and there have certainly been a few visual downgrades compared to the other console versions of the game, which is a shame because you would think a game like this wouldn’t necessarily be pushing the Switch to its limit.

I have to be honest, I was going to score this game much worse based on performance alone. It really was that bad and at times it was almost like watching a slideshow. But in its now fixed state, it’s hard to pick many issues I had with the game to be brutally honest. It won’t be the most exciting game you’re ever going to play but it is well worth its five-hour playthrough. I’m not fully convinced that the style of game will suit everybody and I think it is quite a divisive game, but I would urge anybody to give this a try, because if it clicks with you it can easily be one of your favourite games of this year. There aren’t many games like this around and that needs to be changed.