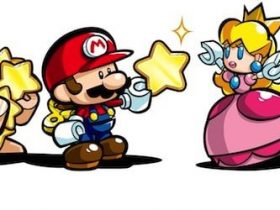 Mario vs. Donkey Kong winds up for Wii U

Lightfoot Brothers has announced that The Mystery of Woolley Mountain will release on Nintendo Switch next month.

This Kickstarter-backed project is an otherworldly point-and-click adventure that has taken inspiration from Monkey Island, Day of the Tentacle, and The Trap Door.

With head-scratching puzzles, you will join a renegade crew of time-traveling audio scientists who must set out on a fantastical quest to rescue a group of children that have been taken captive on the mysterious island of Woolley Mountain.

“Woolley Mountain encapsulates everything about us, everything that we embody and love – humour, art, adventure, music, cartoons, other worlds, camaraderie, puzzles and time travel,” explains lead developer James Lightfoot. “We really hope we’ve created a world that you want to exist and play in over and over again.”

The Mystery of Woolley Mountain will release on the Nintendo eShop for Nintendo Switch worldwide on April 10th, priced at £9.99 (€10.99/$12.99) with a 25 percent pre-order discount.