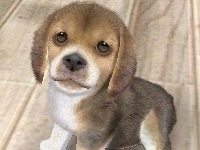 A wise man once proclaimed that “It’s dangerous to go alone!” But while he armed us with a sword, Link would adventure solo for many years until Game Boy Advance’s The Legend of Zelda: Four Swords. It was the first time that multiplayer had graced the series, rallying up to four players in questing to reseal wind mage Vaati in the Four Sword’s mighty blade.

Nintendo’s experimentation would return in GameCube’s The Legend of Zelda: Four Swords Adventures, but technology has long advanced beyond requiring players to unravel tangled Link Cables to set out on an adventure together. The Legend of Zelda: Tri Force Heroes was sprung as a surprise in E3 2015’s Nintendo Digital Event, and treads game director Hiromasa Shikata’s desire to craft a co-operative multiplayer experience that shifts away from the more competitive play seen in Four Swords.

We’ve already had a nostalgic trip with The Legend of Zelda: Majora’s Mask 3D earlier this year, but The Legend of Zelda: Tri Force Heroes delivers on a newfound sense of adventure. Choosing to subtract the overworld, the Nintendo 3DS exclusive instead places emphasis on thrusting your merry band of adventurers into as many dungeons as they can before the credits eventually roll. 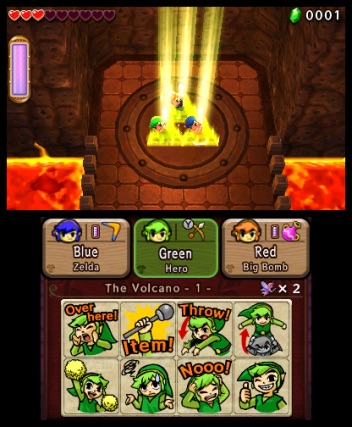 We are cast in Hytopia this time around, a kingdom with a stylish flair for fashion. When a witch doesn’t take too kindly to trendsetter Princess Styla, she sends a present that curses her to forever wear an unfashionably drab costume. With the kingdom’s people now living in fear of the curse, King Tuft recalls a legend that says three legendary Totem Heroes will appear to save Hytopia when danger looms over it. Those Totem Heroes have three recognisable traits: pointy ears to help them hear their comrades’ voices; thick sideburns to help their comrades in times of trouble; and a perfect side parting, which is seen to be a sign of a sure and unshakeable friendship.

Expectedly you tick all three requirements, with the King promising to reward you with a unique boon if you daringly venture into the nasty Drablands to defeat the witch. What would a totem be with only one hero, though? Players will be able to team up through Online, Local and Download Play, or Witch-Hunting Brigade commander Sir Combsly shares that the Doppel Master can let you travel alone “… Though it is dangerous…”

Dungeons range from mediocre to exceptional, with the same scale notably reflecting your progression through the eight areas in The Legend of Zelda: Tri Force Heroes. I was largely underwhelmed by the opening Woodlands and Riverside areas, but as Nintendo begins to steadily ramp up the difficulty it leads to the later areas delivering more memorable experiences. 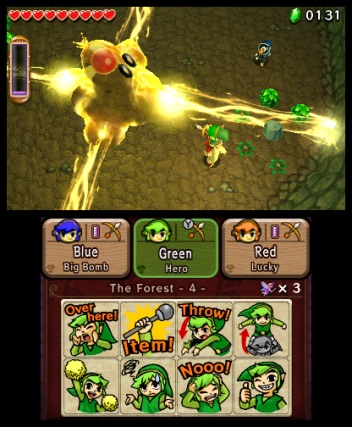 It is the game’s unique Totem mechanic that makes the puzzle-solving all the more fun, players leaping on each other’s shoulders to slash at switches, fling fire arrows at unlit torches or simply be thrown to a higher ledge. Early on you are suitably eased into co-operative play, largely able to complete levels without much assistance from your adventurer companions. But, progression will soon see in levels where you are separated and must each deduce the solution to your own puzzle. The Legend of Zelda: Tri Force Heroes is in its element when you unite together to work out what’s being asked of you, and there’s a real sense of accomplishment when you succeed and gather at the Triforce-shaped teleport awaiting you at the end of a stage.

Each player equips one of three preselected items when you start a level, whether that be a Boomerang, Bow, Bombs, Water Rod, Gripshot, Fire Gloves or Magic Hammer. Every player won’t necessarily have the same item as one another each time, and this again promotes the feeling of camaraderie as you work together in putting them to use to conquer puzzles. That’s heightened even further with the Guardian bosses that you will face in the concluding level of each area. These were standout moments for me in The Legend of Zelda: Tri Force Heroes, working as a team providing an entirely new gameplay approach to taking them down, and easily rank among the unique boss encounters that have graced the series in recent entries.

Beating any level will reward each player with a material as well as the Rupees that you have gathered along the way. Both are important, as they can be used in kooky Madame Couture’s tailor shop to craft outfits famous for their special powers that will aid you on your adventure. These include the Big Bomb Outfit that makes your bombs larger, the Kokiri Clothes that lets bow-wielders fire three arrows at once, and the Serpent’s Toga that makes you invulnerable when you stand perfectly still. Each presents their own unique benefit, and helps players play to their strengths – or to cover any weaknesses! You can also look forward to each outfit unlocking a stamp to use on Miiverse too. 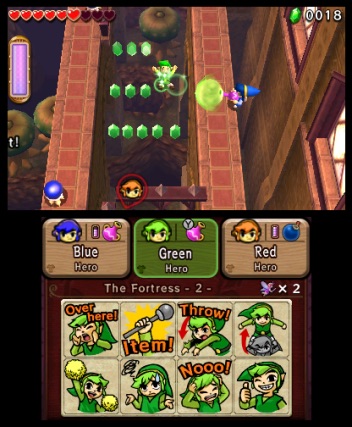 It took time to warm to The Legend of Zelda: Tri Force Heroes, as I spent the opening hours playing solo. Tackling dungeons alone failed to spark that Zelda magic as easily, with the lone player left to control Link and two Doppels – which are described as vessels for your soul. Conceived as a multiplayer experience, it’s notably more cumbersome to tackle the adventure alone – players having to switch between the three characters on the touchscreen as you separately move them into position. The absence of any button input for switching character is a mystifying choice, especially when L and R Button alone are both reserved for Dash. Even simple commands for your Doppels to follow you or be summoned to your location would have been appreciated, although that would admittedly present situations where puzzles could be bypassed. It does feel almost as if single-player as an option was an afterthought, and Nintendo is trying to steer you clear of it.

That’s understandable when you realise how much The Legend of Zelda: Tri Force Heroes excels as a multiplayer experience. I’ve extensively tried Online, Local and Download Play options, the social interaction afforded by the last two being the preferred method of play – mainly due to the more immediate reaction to trying to coordinate your efforts.

Online Play is by far the most convenient, and even those that can only call on one friend will find themselves matched fairly promptly with an extra player to complete the team. Outside of relying on your Friend List, players can search for ‘Unknown heroes!’ which will look to quick match you with anyone in your region. Nintendo has shared the reasons behind their decision not to include voice chat, with players instead left to use emotes to communicate with one another. These work better than expected, but as you reach more advanced levels in The Legend of Zelda: Tri Force Heroes the lack of nuance can hinder your team’s puzzle solving. 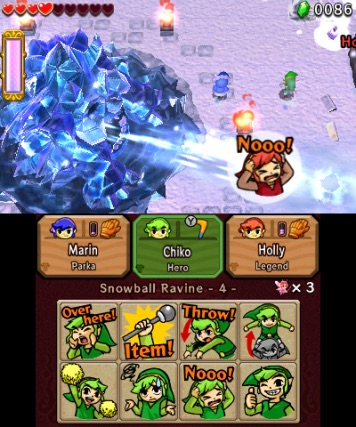 Those worried that they will be matched with nuisance players that won’t work co-operatively can take solace in the blacklist. This allows you to register up to one hundred players that you don’t wish to play with simply by selecting their hero panel and pressing A and B Buttons, meaning that you won’t be matched in Online Play moving forward. They’re humorously referred to in-game as “Fake Heroes!”, but I’m glad that Nintendo has taken steps to implement this.

Meanwhile, Nintendo’s approach to Download Play is a generous one, only requiring a single copy of the game to allow two other players to join you. They can assist with any level that the host has unlocked, but restricts you in only allowing collected materials to be carried across to the full version if they choose to snap it up.

Local and Download Play also afford the benefit that for each unique player you adventure with, you will be rewarded with a Friendly Token. These can be exchanged in-game to unlock special outfits that can’t be earned any other way, such as the Timeless Tunic that completely transforms the rousingly medieval, orchestrated soundtrack into a retro 8-bit soundscape. 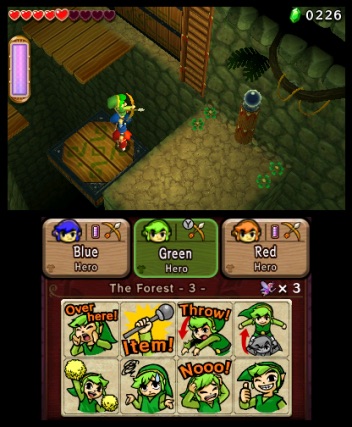 I haven’t experienced any issues with lag in Online Play, but intermittent buffering hampered our adventure when I tried Download and Local Play. That came as a surprise, especially considering we were all playing on New Nintendo 3DS / 3DS XL systems within a short distance of one another, and nothing nearby that would have posed any interference with the signal. Still, it was a minor frustration and we still managed to reach the dungeon’s conclusion.

Head to Hytopia Castle’s basement and you will discover the Coliseum, which allows players to engage in competitive multiplayer over Online and Local Play. Up to three players can take part, trying to reduce your opponent’s hearts to make them faint. Players will be repeatedly revived, with the winner determined by who has the most remaining hearts and fainted the least. Victory spoils come in Rupees as standard, with the player in first place also receiving a hard-earned material.

Aside from Madame Couture’s, Hytopia also has three shops in Daily Riches and Miiverse Gallery. Daily Riches is described as the number one entertainment spot in the kingdom, letting players open one chest per day to try to earn a material. Whereas Miiverse Gallery stores screenshots snapped in the Drablands – taken by pressing the X Button at any time – and looks to encourage you to post them on Nintendo’s alternate social network. Taking a look through the Community will temporarily suspend the game, but it will be heartening to see everyone sharing their own experiences. 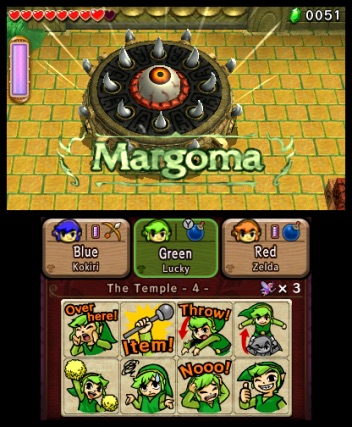 The Legend of Zelda: Tri Force Heroes reuses the graphic engine used for The Legend of Zelda: A Link Between Worlds, but the Drablands doesn’t have as much visual impact as much as Link’s quest into Lorule. Hytopia still packs plenty of character, and, considering that this is a spin-off, the soundtrack is given as much care, pizzazz and energy as the mainline series.

Longevity awaits you beyond completing the 32 levels in The Legend of Zelda: Tri Force Heroes, away from simply hunting out materials to craft any remaining costumes. Clearing each area will see players unlock three Bonus Challenges for each level, which will prove a harsher test for more advanced players – requiring you to complete your adventure with fewer hearts, without a sword or with the level in complete darkness.

The Legend of Zelda: Tri Force Heroes isn’t the pinnacle of the series, but it was never intended to be. This diversionary spin-off packs hours of hilarity for those that can rally two heroic heroes to form a legendary party, although proves more problematic for those wandering Hytopia alone.