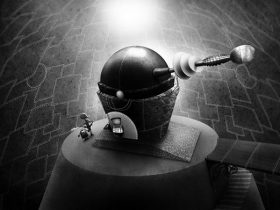 Filmia the frog prince is brilliant. If there was a single reason why The Legend of Legacy was worthy of your time, let it be this well-mannered, royal amphibian.

The ribbiting explorer is but one hero in this Nintendo 3DS exclusive’s cast, seven mighty adventurers having gathered to quest around Avalon. With the legendary island having surfaced in the northern seas 10 years ago, adventurers and researchers have become fascinated by its emergence and believe that it is where the gods had once lived among humans.

Each hero has their own reason for wandering on such a merry adventure, but they unite towards a common goal when they stumble upon a singing stone. Witnessing illusions that reveal Avalon’s long-forgotten history, your journey suddenly discovers a whole new meaning. As their curiosity is piqued, you will soon be drawn into the mystery surrounding The Star Graal and the elementals that can only be seen in Avalon. 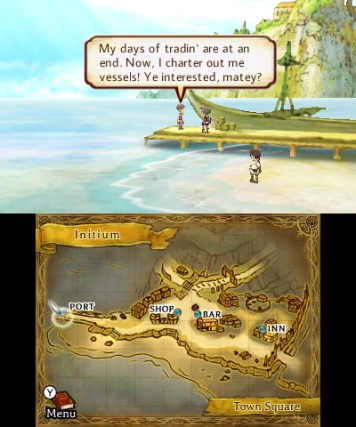 The Legend of Legacy is unique in that players choose their main hero, who is then accompanied by two others from those who weren’t quite so lucky. Whether that be treasure hunter Liber, alchemist Eloise, amnesia-sufferer Bianca, elementalist Meurs, templar Garnet, mercenary Owen or heroic frog prince Filmia, each tells the tale from a unique perspective and present their own battle styles.

That means that, for those that are willing to invest their time, the game is designed to be replayed seven times. Each character not only shares their own interactions along the way, but present differing concluding events to the game’s main story. Clocking in at around 30 hours to complete, seeing them all is no small feat. Sadly, you will feel little motivation to do so.

The narrative is easily where The Legend of Legacy falls short, summoning enough intrigue to perplex the player but never following through with strong enough direction to carry them until the credits roll. That can’t even be attributed to the decision to split storyline arcs between several characters, but more in the fact that little attention has been given to helping players piece everything together. It becomes an even sharper disappointment when you learn that Chrono Trigger writer Masato Kato penned it all. 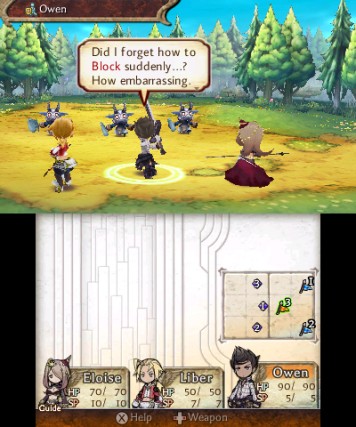 First welcomed at the Town of Initium by the King of Adventurers, players set out into the wild unknown with little guidance in regards to what exactly is required of them. As the brave souls with courage to explore Avalon’s mysteries, players gallivant between map areas as they hunt for any undiscovered singing stones. These melodic slabs whisper elusive hints about Avalon’s secrets, but you will often stumble on them by chance.

It, therefore, doesn’t come as a surprise that The Legend of Legacy rewards you for thorough exploration. The player’s party automatically maps out uncharted territory on the touch screen as they hurtle around, and can sell their penned maps whenever they return to Initium. It’s a nice touch, and certainly tapped into my OCD…

While adventuring, you will notice marauding enemies that will chase you down once spotted. If they come into contact, you will be thrust into battle where your party has chance to defeat their attacker. Every character can wield any of the eight weapon types that The Legend of Legacy chooses to deploy, with each lending their own set of skills. These can be levelled through regular use, with chance that a more powerful skill can become ‘Awakened’ by their respective character. 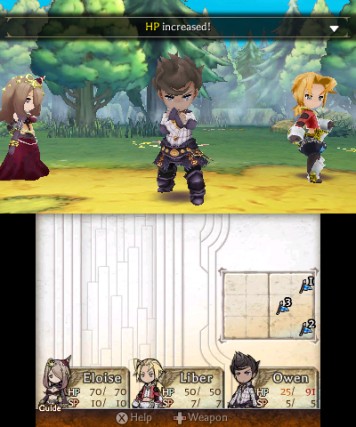 Adding a more strategic layer to battle scenarios, players can create multiple formations that they can freely switch between each turn. These decide which stance each party character will assume that turn, whether that be Attack (increases damage dealt), Guard (reduces damage taken) or Support (increases speed and healing abilities). In lengthier broils, learning how to react each turn can soon turn a worrying battle in your favour, and this soon proved itself to be a key strength.

Water, air, fire and shadow elementals throw in, even more, tactical play, with characters able to wield Whispering Shards that let them forge elemental contracts in battle. This allows you to borrow their power to cast elemental charms, that, again, will become stronger through repeated use. Mightier enemies can also forge contracts, and this is partly where the battle design can easily become unstuck. Players must compete to make sure that their desired elemental is dominant, otherwise, risk their opposition overpowering them. It’s a stray to differentiate, that doesn’t necessarily succeed.

There’s a hand-drawn charm to The Legend of Legacy‘s visual design that adds to the game’s appeal, magnified by a quirky decision that sees your surroundings pop up around you as you explore. It often feels like you are wandering on the maps that your party draws, which delights even if the game’s colour palette is particularly plain as a result. 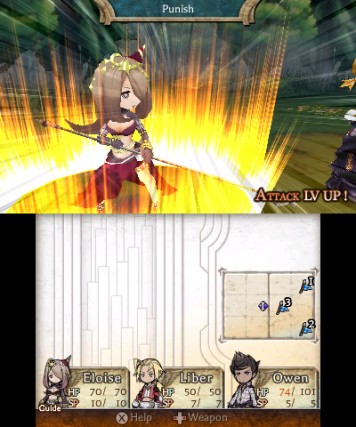 A rousing soundtrack scribed by esteemed composer Masashi Hamauzu will soothe and haunt in equal measure, even if it in places sounds not too dissimilar to music that he composed for Final Fantasy XIII. Still, it proved a highlight.

It is a lack of cohesion that sees The Legend of Legacy slightly miss its mark, despite some clear strengths within its otherwise carefully considered design. There is still much to commend, but it isn’t enough to be remembered as a legend in its own right.