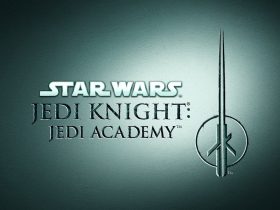 Grab a cell buddy to hold your pocket because The Escapists 2 has finally chiselled its way onto the Nintendo Switch. So, how does this little pixelated prison sim hold out? Well, do us a favour and keister this shank while I fill you in on the details.

Originally sole-developed by British bedroom programmer and ex-roofer Chris Davis, the original The Escapists not only manage to double its Kickstarter goal but also bagged a publishing deal with Worms creators Team17. The game soon sparked a following due to an absurdly high amount of views thanks to successful YouTube nerds such as jacksepticeye – who happens to make an appearance in this sequel as a result.

You begin as a fugitive bragging about his previous escape while lapping it up on a desert island. This works well enough as a very basic tutorial of sorts to familiarise you with its fairly simple control system. It doesn’t take long, however, until you are banged up in a maximum security penitentiary while being reintroduced to the hard knock life that awaits you. It is from here where you begin to study how the system runs so you can plot your next inevitable escape attempt. 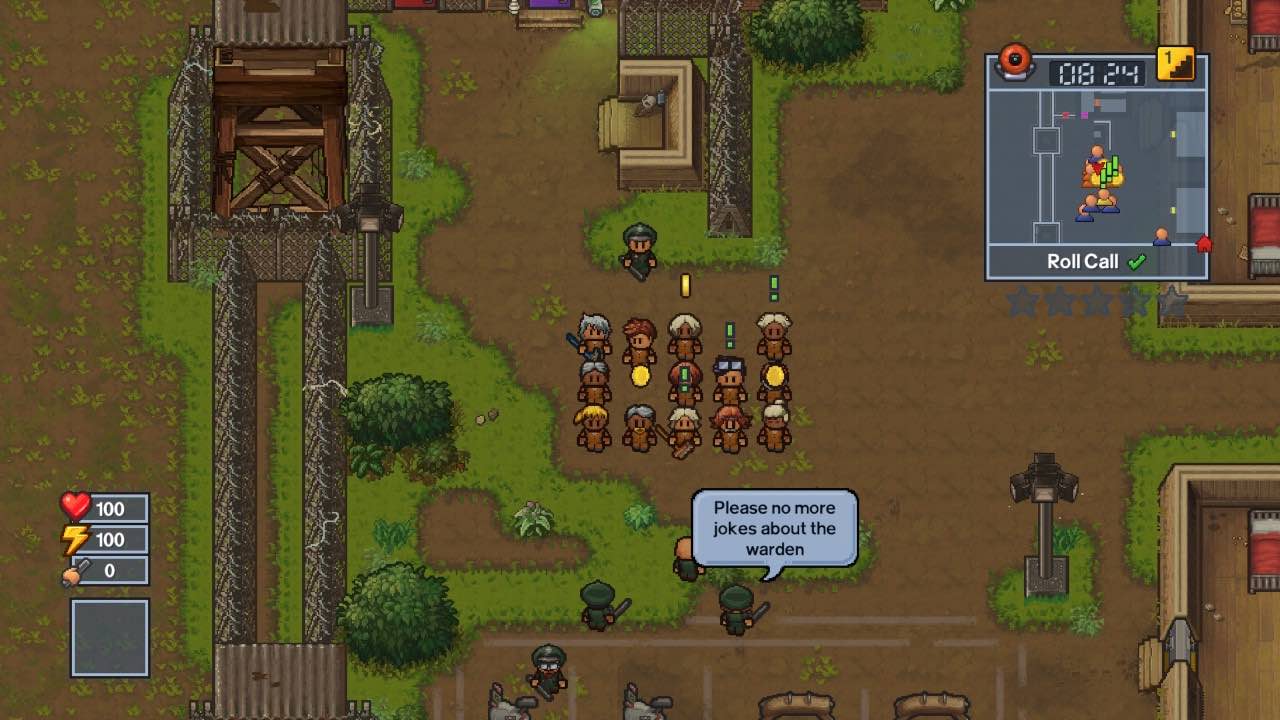 Each day in The Escapists 2 is based on a rota that you should abide by to some extent, as you don’t want to cause suspicion from the guards. At the beginning and end of each day, you get rounded up for a roll call while the prison guards randomly choose a couple of cells to be turned over. Appointments throughout the day that require your presence include dinnertime and a job shift that you can obtain if you’re brazen enough to get an inmate sacked. However, it’s the exercise period that you will want to pay attention to if you aim to become fit enough to make a run for it.

It’s not just your body that you need to train to crawl your way to freedom, as your intellect demands a workout too in order to learn how to craft useful items to help you escape. Training these attributes contribute to the RPG levelling up system set in place, giving you a reason to stick within the rota while you scope the opportunities that play within your favour.

If you are like me and never actually played through The Escapists before, it can be quite easy to get stuck within the daily rota without having much of a clue on how to take advantage of what’s available to you. While the tutorial is helpful enough to understand the absolute basics, there really isn’t a lot of guidance when it comes to helping you understand what actually does what. This leaves you with a lot of trial and error while you aimlessly experiment with contraband that you have crafted from the overwhelming amount of options to choose from. This, in turn, can lead to tedium that makes you truly feel like your doing bird. That is, of course, until you finally get a lead on a possible escape route. 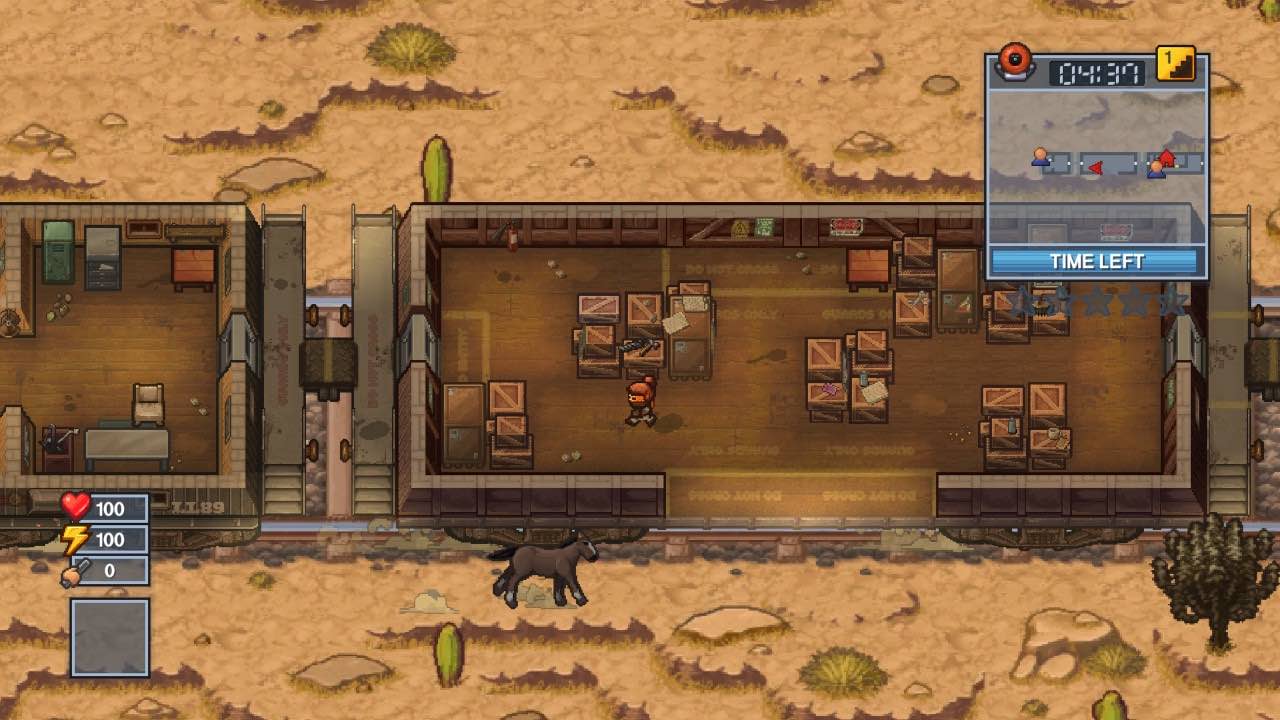 Once it does all finally click together, the possibilities of making a run for it are endless and provide some decent replay value as a result. And then you have the three transport levels in between that breaks the usual formula of the 10 maps in total. Whether it be land, sea or sky they are much more linear than the usual structure with the extra burden of a time limit. This forces you to think quickly if you want to successfully disappear before reaching your destination. These smaller sections are a welcome addition that creates a nice change from the long con that you usually endure within the traditional prison layout.

Where The Escapists 2 begins to really shine through, is within the multiplayer. Just like with most criminal mastermind partnerships, there’s always the liability. Earning and gathering resources may seem easier when working together, but exchanging contraband within your partner’s cell, or a spontaneous irrational act from your mate may very well stir the screws the wrong way. This will usually lead to a bit of a beatdown with all your equipped items confiscated as a result. Needless to say, looking out for each other is key to success, while awkwardly sabotaging each other’s plans will lead you to do more solitary than Charles Bronson. The effort of teamwork to plot an escape is certainly a rewarding experience and one of the bigger highlights of the game.

If you have more of a competitive spirit, then there is a versus mode in which you can race to be the first to freedom within the allocated time limit. The rules are much more relaxed this time around with the absence of a rota and better items to craft with from the get-go. While this caters more to experienced players, going in as a newbie can be a good way to experiment with different methods and crafting potential. After all, it can take a long time to gain the necessary tools in the main game and having it all taken away from you in one fell swoop is a soul-crushing ordeal. Regardless to say, team player or not, you can always play each mode online with up to four players both public or privately amongst friends. Unfortunately, the Nintendo Switch version only supports two-player split-screen local multiplayer, unlike the four player options found on other platforms. 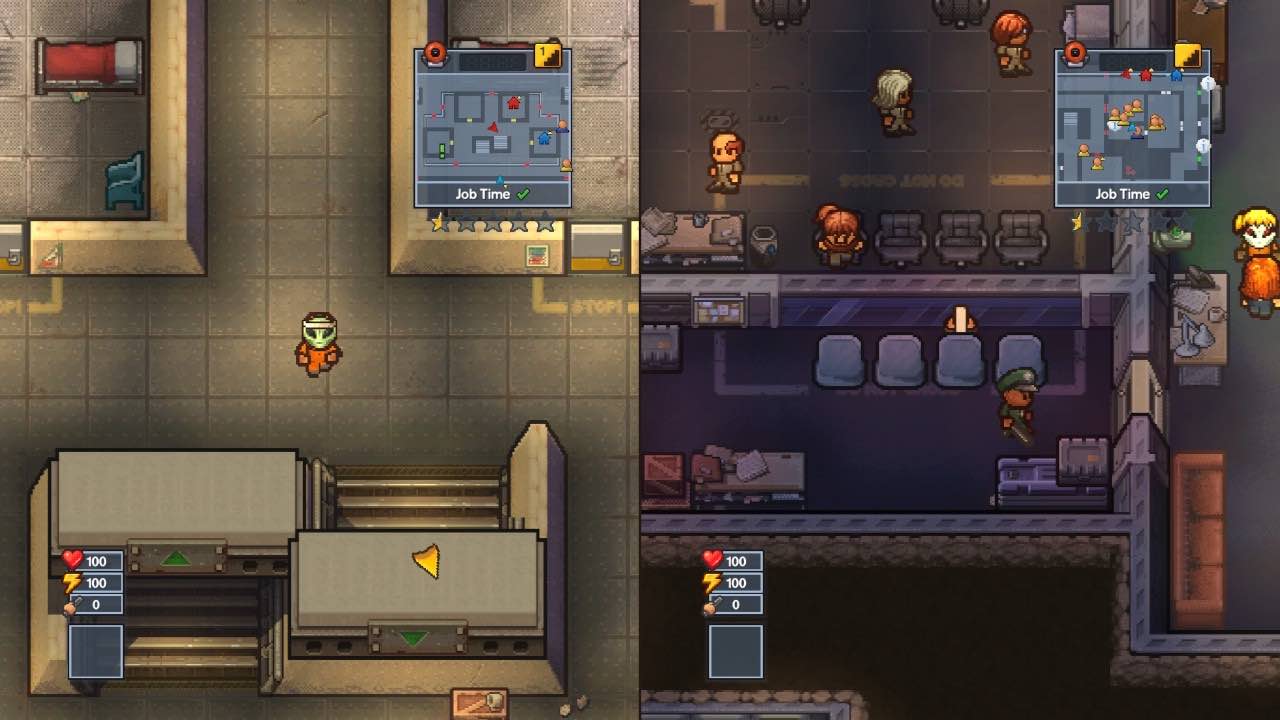 Visually, The Escapists 2 very much reminded me of a 16-bit take on the New Ghostbusters II game that was released on the NES in the early 90’s. While simple on the eye, it all looks visually appealing, fitting perfectly in line with its oddly adorable presentation. Just reading the sarcastic remarks from the guards during roll call is enough to make you chuckle, while beating an inmate to an inch of his life is handled much more lightheartedly than you would naturally expect. The sound is decent enough too, from the chirpy tones of your free time period to the motivating beat for when it is time to pump some iron.

All in all, The Escapists 2 does a decent enough job in providing that Shawshank Redemption fix you’ve always dreamed of. So much so that when you do finally make it out, you will probably fall to your knees while staring at the stormy sky in relief. Naturally, this game isn’t going to be for everyone as it can be quite intimidating for beginners. It may also test the patience for those who lack it or are initially looking for a quick fix. In all fairness, it is prison after all. It was never going to be a walk in the park. Now shut up and eat your porridge.